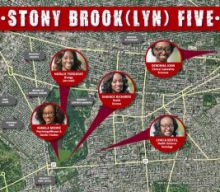 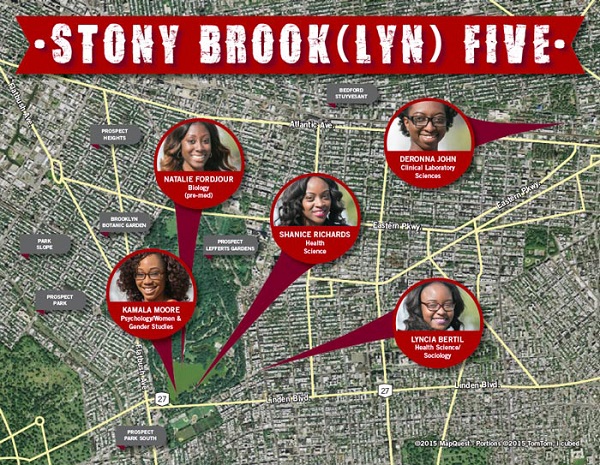 As a prestigious AAU flagship of the SUNY system, Stony Brook University prides itself on access to excellence for economically disadvantaged students by maintaining competitive in-state tuition, merit-based scholarship opportunities and a highly successful Educational Opportunity Program/Advancement on Individual Merit (EOP/AIM) program. Just ask these five women: Lyncia Bertil, Kamala Moore, Deronna John, Natalie Fordjour and Shanice Richards. Three are first-generation Americans, and all of their families settled in the Flatbush and Bedford-Stuyvesant neighborhoods of Brooklyn after traveling from Barbados, Grenada, Haiti and Ghana. Some grew up together, others met on day one as freshmen enrolled in the EOP Summer Academy, and on Friday, May 22, they will together, as great friends, receive four-year degrees – with honors – from Stony Brook, with majors that include biology (pre-med), health science, clinical laboratory science, psychology, women’s gender studies and sociology.

Stony Brook University has been fulfilling New York State’s commitment to provide access to higher education for economically disadvantaged students who possess the potential to succeed in college, but whose high school education has not sufficiently prepared them. To that end, at an education summit at The White House last year, University President Samuel Stanley pledged a number of learning initiatives aimed at improving its four-year graduation rate to 60 percent by 2018 and committed to investing $2.2 million in financial aid to protect low-income students from future tuition increases. See more here: President Stanley Attends White House Summit on Expanding College Opportunities.

“Stony Brook University has exponentially expanded our academic intervention and support, tutoring, experiential learning, and academic advising, and it’s paying off,” said President Stanley. “These five women are a true representation of the many motivated students who have come through our incredibly successful EOP/AIM program who may not have had the same bright future without it.”

Stony Brook’s EOP Summer Academy provides a transition time for students who are, based on their socio-economic and academic background, not fully prepared for the rigor of higher education. Summer Academy is just one of the many programs at Stony Brook that are making a difference in students’ lives. These programs have enabled Stony Brook University to be ranked #3 nationally in social mobility among public AAU research universities.

In its 46th year, Summer Academy will welcome 180 students when it begins on July 5, its largest class ever. There were 6,000 applicants for the 180 openings. In selecting the participants, the university looks for students with great potential who are most economically disadvantaged and are also first-generation college students.