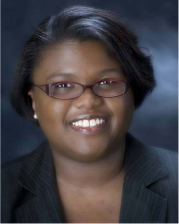 Boeing engineer Madeline Augustin, who earned her bachelor’s in engineering science from Stony Brook University in 2005, received top honors from the National Society of Black Engineers (NSBE) and the Black Engineer of the Year (BEYA) organization for her exceptional work in developing manufacturing and assembly processes.

Augustin, a materials, process and physics engineer in Charleston, South Carolina, was given the Celestial Torch Outstanding Women in Aerospace award at the NSBE conference in Los Angeles last month, in part for her leadership and achievement in advancing aerospace technology. During her six years at Boeing, Augustin has worked as a stress analyst engineer and has supported both commercial and military programs. Currently Augustin supports Boeing Research and Technology in Charleston on the 787 program. She was also one of 23 Boeing employees named “Modern Day Technology Leaders” at the BEYA conference in Philadelphia last month.

“I am honored to receive these awards because of what they represent in terms of the aerospace systems community,” Augustin said. “It motivates me to continue to live up to the NSBE and BEYA missions to make waves in the technical arena. I share this honor with my family, colleagues, professors and mentors for they have had a profound impact on my successes and ability to inspire and motivate others.”