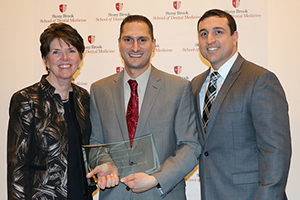 The Distinguished Alumni Award is an honor bestowed on a select few who have contributed to the profession, school and alumni in an exemplary manner. The audience gave Dr. “K” a standing ovation in recognition of his outstanding achievements and support of the School.

Dr. Kilimitzoglou’s commitment to ‘giving-back’ is outstanding. Not only has he served and chaired numerous boards in the Suffolk County Dental Society and is currently the President Elect of the Suffolk County Dental Society, he is also the past president of the Stony Brook Alumni Association. In 2005, he created the Dimitrios Kilimitzoglou Pioneer in Dentistry Award, which is given each year at the Awards Ceremony in May, and in a further demonstration of his generosity, he created an Endowed Scholarship intended to recruit talented incoming dental students in 2011. In addition to serving members of his profession, the local community, and Stony Brook students and alumni, he also serves his country. In 2008, he became a Major in the United States Air Force/Air National Guard.

Following the presentation and acceptance of the 2017 School of Dental Medicine Distinguished Alumnus award, Dr. Kilimitzoglou led the class of 2020 in reciting the Hippocratic Oath.