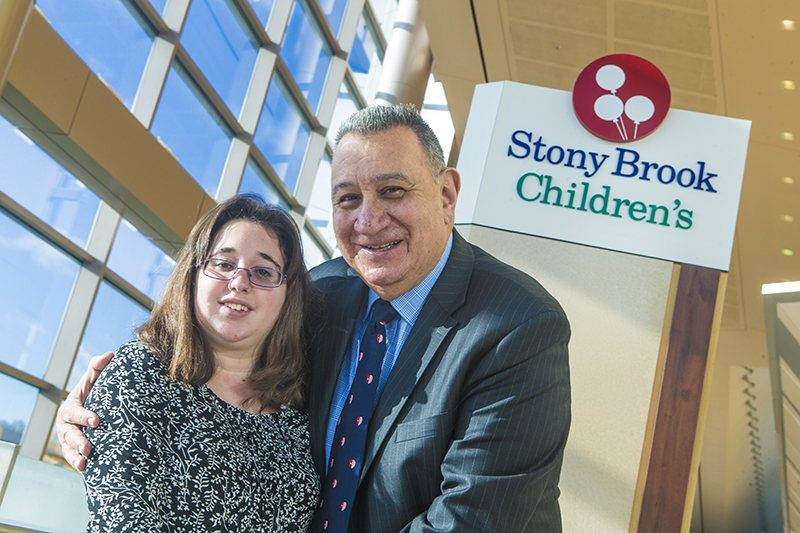 She’s 21 now. Lives on her own in an apartment, loves the Bronx Zoo and volunteers at the Smithtown Animal Shelter.

But Peter Ferentinos vividly recalls when his granddaughter Felicia was the size of “half a chicken,” gulping for air and fighting for life in the neonatal intensive care unit at Stony Brook University Hospital.

“I remember her flailing in the incubator. Just 26 ounces. That’s all she weighed when she was born,” Ferentinos said, choking back tears. “She had tubes all over her. I watched her tiny chest go up and down with each breath. She was struggling, but she had this tremendous will to survive. It was amazing.”

Born three months premature, Felicia spent six weeks in the NICU and more than two months total at the hospital before she weighed enough to go home with her parents. Her remarkable survival isn’t the only reason Ferentinos has donated more than $150,000 to Stony Brook Children’s Hospital. But it’s a pretty big one.

“My granddaughter’s care is what originally got our family involved with Stony Brook,” said Ferentinos, who served on the Stony Brook Medicine Development Council.

“Stony Brook has a special place in my heart. I love Stony Brook. And it just makes me feel good to give back,” added the Smithtown grandfather whose donations to the Children’s Hospital have had a total impact of more than $300,000 thanks to a matching gift from an anonymous donor.

Ferentinos – chief operating officer of several successful companies including the pool chemical packaging company Qualco Inc. in Passaic, NJ – also credits Stony Brook for saving the life of his son Peter, who about a year ago was nursed back to health at the hospital after suffering a traumatic head injury when he slipped on ice.

In explaining the timing of his generous giving to Stony Brook, Ferentinos was frank.

“I’m 76 years old. At 76, you get to the point where you say, ‘You can’t take it with you,’” said Ferentinos, a cancer survivor who has given an additional $100,000 to other Stony Brook Medicine projects, including sponsoring Cancer Survivors Days.

“It’s time to put my resources to good use,” he added.

Ferentinos and his wife Barbara raised seven children in Smithtown. The couple has 17 grandchildren and one great-grandchild.

Satisfied that his family has the means to live comfortably for the foreseeable future, Ferentinos has taken to philanthropy to positively impact the world.

“It’s a matter of wanting to give back and get deeper roots in the community,” Ferentinos said. “Stony Brook is a great opportunity to do that. I believe in the mission of Stony Brook. I want to help in any way I can for Stony Brook to be successful.”

The reason Ferentinos is in the financial position to be so generous to Stony Brook is that he made it a point to always live below his means.

For a long time, he didn’t have a choice. By the time he was 27, he had all seven of his children, was working full-time and chasing down a bachelor’s degree in business by taking night classes. He was 30 when he earned his degree.

“I am a first-generation American,” said Ferentinos, whose parents emigrated from Greece and Italy. “My parents experienced true hunger when they were children, growing up in Greece and Italy during World War I. Later, after they moved to America, they lived through the Great Depression.

Ferentinos said he and his wife family always lived “10 percent below our pay check.” Doing that allowed the family to build up its first nest egg.

“I’m about the squarest guy you’ve ever met,” Ferentinos explained. “My wife and I have been married for 58 years, and we’ve lived in the same house for 47 years.”

The Ferentinos family got its big financial break in the late 1970s when Ferentinos, then 40, worked as a manufacturer’s rep for Rockwell International’s Microelectronic Product Division.

It was the hey day for handheld electronic games and Selchow and Righter, the board game company that produced Scrabble, was in the market to develop a portable electronic word game. From soup to nuts, Ferentinos brokered a deal that propelled an investment career that soon secured the financial future of his family.

He put together a team of engineers to develop the circuit board for the game’s prototype, partnered with a manufacturer in Hong Kong, and eventually sold thousands of microchips to Selchow and Righter.

Even with the windfall, Ferentinos said his family resisted the temptation of changing their lifestyle.

“We kept the same car and stayed in the same house,” he said.

In 1986, when Coleco went under, Ferentinos bought one of their bankrupt entities, a pool chemical company named Coastal. At the same time, with the Coastal deal held up in court, Ferentinos separately bought Utility Chemical, which became Qualco Inc.

“I’ve been lucky my whole life,” he said. “At every stage in my life, whenever I thought I was at a moment of despair, it turned out to be the best thing that ever happened.”

“No one else has made the personal in roads that Stony Brook has,” he said. “There is a personal connection to the school that no other institution on Long island has made.

“I feel good knowing that I am giving to folks who have made an investment in making a personal connection.”