Aquebogue residents Cathy and Russell Goodale found out they were carriers of the cystic fibrosis gene when their six-week-old son, Keith, was diagnosed. Another son, Jeffrey, was later diagnosed with CF. The boys’ lifelong courageous battles with the disease — as well as those of the Goodale’s daughter-in-law, Jennifer, who passed away from CF — were the inspiration for a recent Goodale family financial gift to Stony Brook Long Island Children’s Hospital. 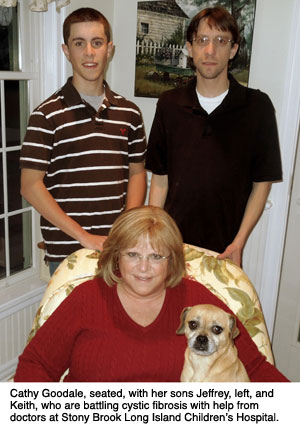 The Goodale family gift will be matched dollar-for-dollar by an anonymous donor and will make a significant impact on the hospital, said Dr. Margaret McGovern, Professor and Chairman, Department of Pediatrics, Stony Brook University School of Medicine, and Physician-in-Chief, Stony Brook Children’s.

“It is the support of grateful patients such as the Goodales that makes it possible for Stony Brook Children’s to continue to expand its services and fulfill its mission as Suffolk County’s safety net hospital and top treatment option for children with such severe chronic illnesses,” she said. “And it’s a direct reflection of the outstanding quality care provided by physicians such as Dr. Kier.”

Cathy Goodale has been facing her own health battle – with breast cancer – since 2003, and yet she focuses on relieving stress for other parents, not only parents of CF children but parents of any child who needs emergency or other care. “Stony Brook Children’s is the hospital, the place to go on Long Island,” she said. “So many parents depend on Stony Brook, as we did. I’ve thought so many times, ‘Where would we be without Stony Brook?’” 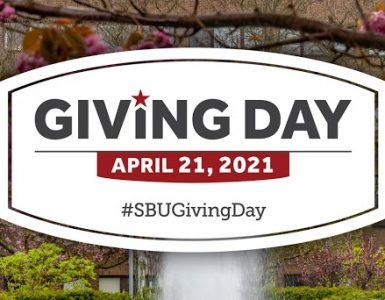 The 24-hour fundraising drive will generate support for students, faculty and research, and to help advance Stony Brook Medicine’s mission to provide the highest quality healthcare.

Described at the time as a facility “designed to meet the cultural, recreational and social needs of students,” the then-new Stony Brook Union, which opened its doors in January 1970, would take over social functions...