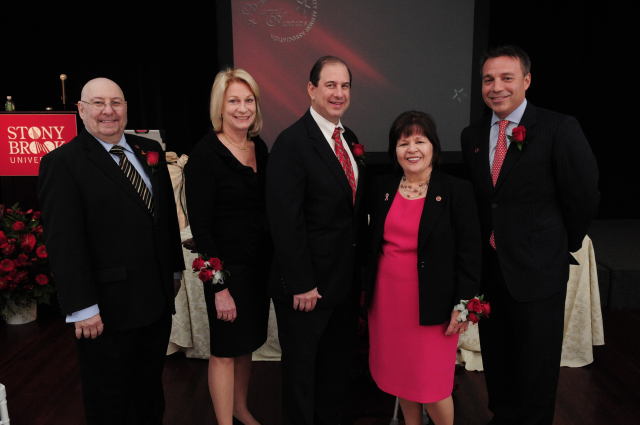 “Our five recipients are a great credit to their alma mater,” said Stony Brook University PresidentSamuel L. Stanley Jr., MD. “Each one is a dedicated and dynamic person who has made the most of his or her Stony Brook degree. They are all a source of inspiration to our emerging scholars, beginning researchers, and developing professionals. They represent the best Stony Brook has to offer.”

“As varied as their career paths have been, they all share a common bond—they completed their studies at Stony Brook University and used their world-class education to make a positive impact on the world around them,” said Stony Brook Alumni Association President Scott D. Middleton, Esq. (BA ’84).

In 2009 Keith Kowalsky, President of Flame-Spray Industries Inc., was named National Inventor of the Year along with his team for the development of the Plasma Transferred Wire Arc Thermal Spray Apparatus and Method, a system designed to improve fuel consumption that is now used by Ford, Land Rover, Nissan, Caterpillar, and Detroit Diesel. He earned a BS in physics from Buffalo State College in 1984, a BE in mechanical engineering from Stony Brook in 1986, and an MS in materials engineering from Stony Brook in 1988.

Aaron M. Podolefsky became the eighth president of Buffalo State College in 2010 and is the co-chair of the SUNY task force on a seamless education pipeline. He earned a BA in mathematics from San Jose State University, MA degrees in liberal studies and anthropology, and a PhD with distinction in anthropology, all from Stony Brook. He is a fellow of the American Anthropological Association and author of numerous scholarly works, including books, textbooks, and articles.

Peter Seccia oversees the North American Derivative Sales business for the Securities Division at Goldman Sachs Group Inc. He started his career in the J. Aron Currency and Commodities Division in 1989 as an analyst in foreign exchange derivative trading in New York. He moved to Tokyo in 1992, relocated to London in 1995, and in 2000, joined the Equities Division to run equity volatility trading in Switzerland. Peter was named Managing Director at Hedge Fund Sales in 2003 and a partner in 2008. He earned a BA in political science from Stony Brook.

Marilyn Simons is President of The Simons Foundation, an organization whose primary mission is to support advanced research in the basic sciences and mathematics. The Foundation, which began in 1994, has grown tremendously over the past 17 years. Marilyn is also President of the Board of the Learning Spring School, a NYC-based school for children diagnosed on the autism spectrum, and a board member with the East Harlem Tutorial Program and the Cold Spring Harbor Laboratory. She earned a BA and PhD in economics from Stony Brook.