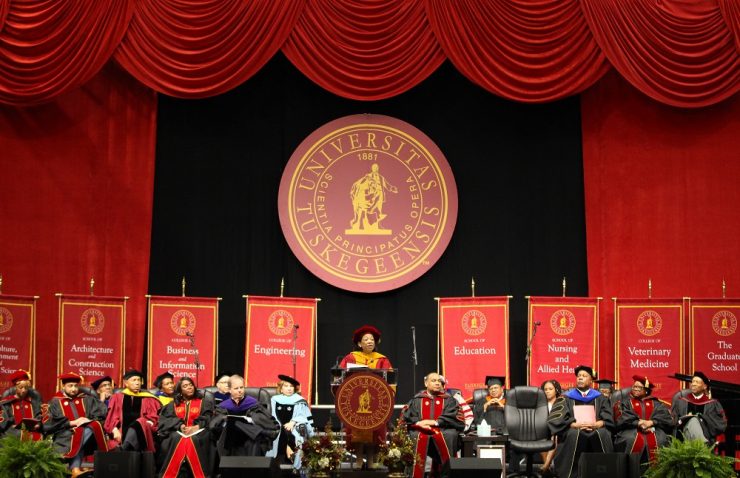 This, along with a lifetime of achievements in higher education, has earned McNair the Stony Brook Distinguished Alumni Award, the highest and most prestigious honor awarded by the Alumni Association.

Before becoming President of Tuskegee University, McNair held senior roles at Wagner College, Spelman College and the University of Georgia, where she became the first African-American woman to obtain tenure and promotion in the Department of Psychology.

As she moves forward in her journey, though, it’s not without looking back at Stony Brook University, a place she says has helped her to become the person she is today.

What does it mean to you to be Tuskegee University’s first female president?

I know that my ascending to this point says a lot about gender relations in the United States. It’s been over 137 years before a woman leader has been asked to come to the fore. It says a lot about the way that society views women’s leadership.

I know that I’m in a position to be a role model for young women. I’ve had girls tell me that I’ve helped them realize that they can aspire to be a college president. I’m really proud about that.

I’ve seen examples of this in my personal life, too. My niece’s daughter, Gia, was in class discussing Booker T. Washington and Black History Month. Her teacher pulled up a picture of me to explain that Tuskegee had its first female president and Gia exclaimed “that’s my Aunt Lily!” I was really proud when I heard that. People in my family keep saying that they have to be at my inauguration because it’s history being made. I don’t think of it like that, but I guess that it is.

You’ve mentioned that you’re following in the footsteps of Booker T. Washington. How does the weight of that lineage impact your approach to the job?

I think about Booker T. Washington a lot. The more I learn about him, the more I appreciate him being such a visionary, not only in terms of Tuskegee, but he also had a great deal of vision around important issues, like African American health. He set a standard that I work very hard to uphold. I think about what he accomplished with hardly any of the resources that I have now and I tell myself that I have to keep moving to make Tuskegee even greater and grander than he imagined. Every time we pass by the house that he lived in, I think about the lineage and the legacy. Of course, for me, that means that people will be looking very closely at what I do, but I try not to let that interfere with moving forward.

What’s really wonderful is that students are aware of the history of Tuskegee University. They understand the legacy of Booker T. Washington and the socio-political context of the founding of Tuskegee. They’re very proud of their place in this world and they’re really proud of Tuskegee. That is such a wonderful feeling for me. It brings me such gratitude to know that I’m here serving these students.

How do you think your experiences as a student, a professor, and an administrator have come together to shape your approach to the presidency?

When I think about my work as a clinical psychologist and therapist, it’s all about listening to people, understanding where they’re coming from and figuring out a way to move forward together. This is crucial in my role as president.

I look back now at how all of my experiences are coming together in my new role and I’m amazed at how well it turned out. I didn’t even have to plan it this way. I never thought I would be a president. I didn’t consider it until maybe 15 years ago. When I was at Stony Brook, my husband and I talked about doing clinical work together. I never thought that I would work in academia and go on to work as an administrator. You can’t predict how life is going to change you.

So how did you find your way to higher education administration?

It was through the mentoring and support of Beverly Daniel Tatum, the President Emerita of Spelman College. Working at Spelman was my first experience as an administrator in that type of setting, but Dr. Tatum recognized my potential and told me that I should think about becoming president one day. I was blown away; I didn’t expect that at all. Then, I thought about it and I realized that I did have something to offer. I’m very grateful for this experience. If that hadn’t happened, I would be at Spelman still, which would be wonderful, but who knows where my career aspirations would have taken me. When I was at the University of Georgia, my aspirations were to become a full-time professor and continue writing books and getting grants. That was my ideal, but things change and you can never predict what will happen.

Let’s talk about your experience at Stony Brook. What was the biggest factor in your decision to come here when you graduated from Princeton?

I came to Stony Brook because I saw it as a University that was young and on its way up. I knew that the faculty in the psychology department were the best faculty in cognitive behavioral psychology and that’s where I wanted to go. Also, when I was a senior in college, I had an Abnormal Psych textbook that was written by two Stony Brook professors, so that was a key factor as well. I knew that that was where the research would be focused.

I got into fantastic graduate schools, but I wanted to go to a University that was on its way up, and that’s what Stony Brook represented to me. It worked out really well. I found a husband there and everything. He was actually the first person I met on campus.

And when you got here, what was your student experience like?

I’ll never forget coming to Stony Brook. My first year, I felt like I had to prove myself to other students – not to the professors, but the other students. Clinical Psychology is very competitive. I will never forget standing in the line at registration and having one of the other Clinical Psychology students ask me what my GRE scores were and what other schools I had gotten into. I was shocked. I felt like they didn’t think I belonged there. That’s one of my most powerful memories from my first few weeks at Stony Brook. I think the other students wanted to find out if the African American students were as smart as everyone else and I think they were surprised to learn that we were. I worked hard at Stony Brook, the setting was a big change for me, but I knew I was getting the best education possible in terms of my graduate career.

I also made connections at Stony Brook that will last a lifetime. My friends were a pretty strong group, and I’m still in touch with a few of my professors. I came back to campus in the early 2000s when one of my professors, Ronald Friend, retired. I actually just saw him in Portland about two weeks ago, which was wonderful.

You mention that you’re still in touch with a few of your professors from Stony Brook, was there anyone in particular who inspired you on your journey?

It would have to be my major professor, R. Lorraine Collins. She was a professor who focused her research on alcohol use and expectancies. When she arrived at SBU, I decided I wanted to work with her. I wanted experience working with an African American woman, so she became my mentor, and she’s been a part of my life ever since then.

After you earned your Master’s and PhD here, you embarked on a career that’s blended research and higher education administration. What aspect of your work has been the most meaningful for you?

I think it’s my work as a professor – teaching and mentoring students. One can always look at your CV and say you’ve published this many books or articles, but that doesn’t say enough about the kind of relationships that you’ve built with your students. I think that teaching and mentoring was a significant part of my experience. As as a President, I don’t get to do much of that, but whenever I have the chance to talk to students and to listen to them, it reminds me of what really fills me with a sense of satisfaction and gratitude.

A few months ago, I told a student that I would be their mentor. My assistant looked at me like I was crazy, but I wanted to give guidance to this student and I do what I can.

How will your experiences in psychology play a role in your position as President?

Every day I use those critical skills, whether it be the skill of listening to people or observing interpersonal interactions and body language so that I can help a meeting move forward in a positive way. Sometimes it helps with conflict resolution, but it really comes down to being someone who cares about people, who wants to listen to what they have to say and help them move forward. I’m not always able to help people by giving them what they want, but I’m able to explain it in a way that they can accept why we’re making the decision that we’re making.

What piece of advice would you give to current students looking to follow in your footsteps?

I would say put your best and your all into everything you’re doing, because when you get to the point of applying to be president, you want your record to speak for itself. You don’t want any skeletons in your closet or any scandals behind you. You want people to look at your work record and let that speak for itself.

Learn more about Dr. McNair and the Distinguished Alumni Award »