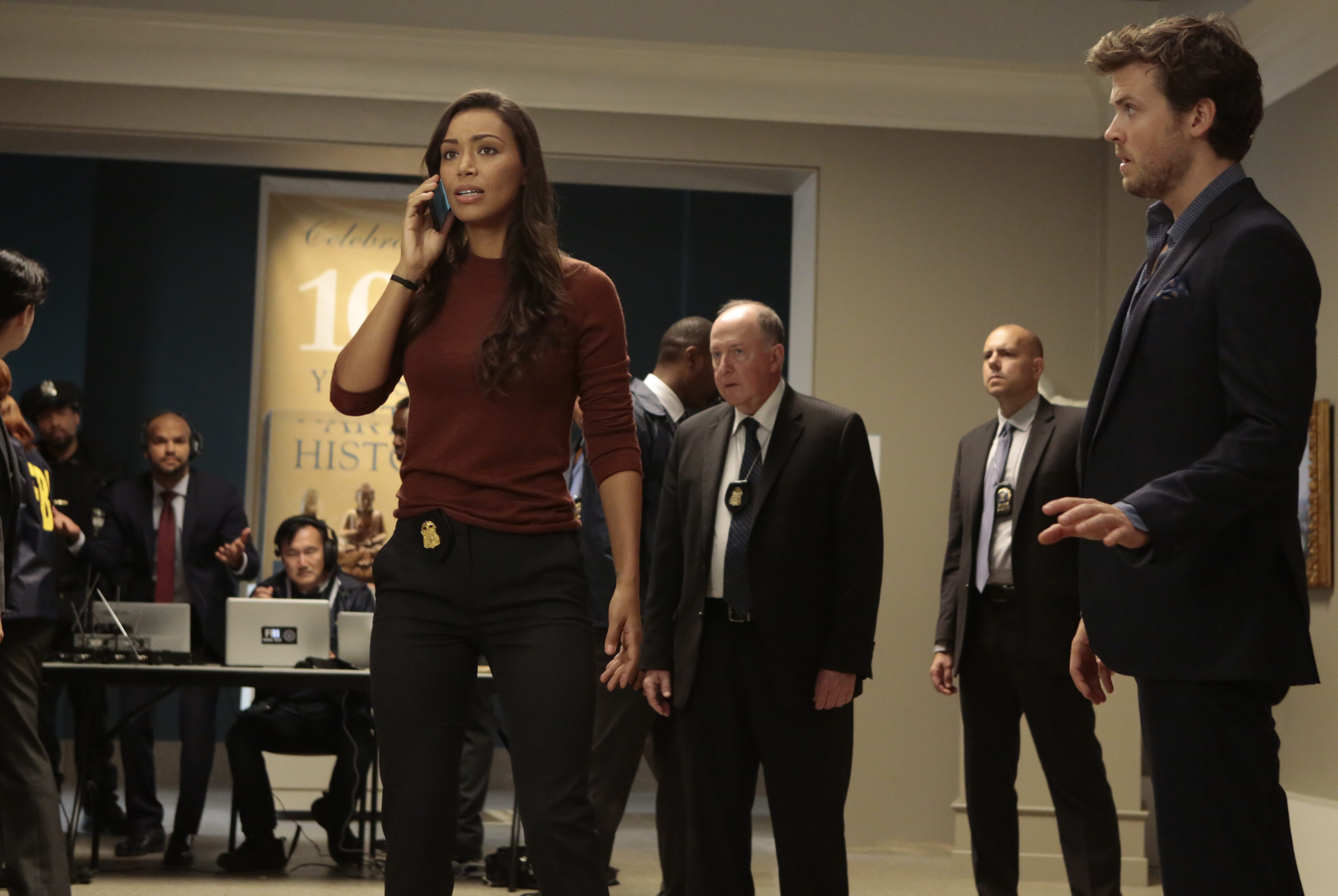 For Ilfenesh Hadera ‘07, the journey to stardom has just taken a magical turn.

Hadera, who graduated from Stony Brook’s College of Arts and Sciences with a degree in political science and was honored this year as one of the University’s 40 Under Forty, stars as FBI Special Agent Kay Daniels on “Deception,” a new crime procedural drama that debuts on ABC on Sunday, March 11. Daniels and her team of FBI agents work with Las Vegas illusionist Cameron Black (Jack Cutmore-Scott) to solve a series of odd crimes that defy traditional explanation, using the magician’s gift for deception to trap the criminals responsible.

It’s the first starring role on a network series for Hadera, whose career has grown by leaps and bounds since her 2010 screen debut in the film 1/20. In the last two years, she’s worked with renowned director Spike Lee in his Amazon Studios film Chi-Raq (a modern adaptation of Aristophanes’ Lysistrata) and on his Netflix series She’s Gotta Have It, appeared in a recurring role on Showtime’s acclaimed series Billions, and hit the big screen alongside Dwayne “The Rock” Johnson as his love interest in “Baywatch.”

Your career, especially over the last couple of years, really speaks to the breadth of the modern entertainment industry: a film on Amazon, a series on Netflix, a premium cable series…but also a major feature film role in a big theatrical release, and now a starring role on a network primetime series. What do those accomplishments mean to you?
There’s so much opportunity for work for actors now. It’s like never before: you’ve got these streaming services, and you’ve got premium cable, and you’ve got network, and you’ve got movies, so there’s definitely no shortage once you’ve got your foot in the door, which is a wonderful thing. I’m from New York, and most of the shows and the work I’ve done has been in New York, which is great for me because this is home and I love it here, so I’ve not had to travel far from my people and my home to work, but I also feel really fortunate to have done a wide variety of work with Netflix, Hulu, Amazon, Showtime, and a studio, Paramount. I feel very fortunate to have been able to dip my toes into all of what we’re seeing now that the future of film and TV is.

Have there been any particular moments – on “Deception,” or working on “Baywatch,” or maybe one of the projects where you worked with Spike Lee – where you’ve had to take a step back for a moment and say to yourself, “Wow, this is really happening?”
Yes! Every time I work with Spike, who’s become a dear friend over the past few years. I worked with him the first time on a pilot called The Brick. It was a pilot that was produced by Doug Ellin, the man who did Entourage. That was my first major role. You go into a room, you know Spike Lee’s going to be in there, you enter with white knuckles, and you’re like, “Oh my God, please don’t flub, don’t mess this up.” I got the role, and I was so naive, and so sure that it was going to go to series, because I thought, “Well, Spike Lee and Doug Ellin, of course, who’s going not going to greenlight this?” and it didn’t go, but he has been so, so supportive over the past few years, and literally every time the phone rings and he’s got another job, it’s just like kind of a “pinch me” moment, because it’s Spike Lee. He’s an icon.

That said, he still makes me audition for every single role that I get in his projects. He’s had to work very hard in his life to move forward, and doesn’t believe in giving things out easily, which I respect him for.

With “Baywatch,” all the work I’d done was in New York, and that filmed primarily in Savannah, and I just had this second of, “This is my life right now,” driving around in my little Kia provided by the studio – it barely ran, but it worked. I was on an off day, going to Whole Foods to buy my groceries, driving around Georgia, and I just thought, “Man! This is my life right now. I’m part of this major film with all these power players and A-Listers, and this is my routine, I’m going grocery shopping.” It was that simple moment that made it real. You never stop that sense of being appreciative.

That’s funny, with Spike Lee: how your first work with him was a pilot that didn’t get picked up, but it’s led to all these other things.
You just never know. You’re bummed, because you think a door has closed and that’s it, but exposure in this business is everything. It’s always good to get out there and be seen. At the time, obviously, it’s heartbreaking, you’re thinking, “Oh no, I’ve been relying on this to get me out of my restaurant job, now I’ve got to go back and tell everyone with my tail between my legs that I’m not done waiting tables yet.”

When you talk about waiting tables and try to get out from that, it feels like so many people have that story, and you wound up working with Dwayne Johnson, who named his company Seven Bucks for the seven dollars he had in his pocket when he was done playing football.
You just have to kind of know that it’s going to happen. I think it’s the only way that you survive in this business is just to have this patience. Otherwise, you could just be crippled by the thought of waiting tables if your ship never sails.

Now, with “Deception,” you’re playing an FBI agent. Is there anything in particular that’s shaped your perspective on the role from being a political science major, and studying the Justice Department in an academic setting? Was there anything like that with Billions, and the Justice Department’s involvement with financial crimes?
I didn’t learn a ton about the FBI during my years at Stony Brook; I could be completely wrong, and time is doing what it does to memory, but I don’t really recall delving into the inner workings of the FBI too much. It’s such a presence and so known about in government, but when you stop to think about what you actually know about the FBI, it seems most people know very little.

We did have a tour of the New York office prior to the start of the pilot, which was really helpful and really fascinating, just to get a glimpse into what they do on a daily basis. We interviewed some agents who were key components in bringing in El Chapo the last time he was arrested. They’re pretty fierce individuals. Then, obviously, we had an FBI consultant, who’d been with the Bureau for 30 years, on hand to answer any questions, talk about what it was like to be a woman in the FBI, anything from that to more procedural stuff: clearing a room, cuffing suspects, and all of that.

With Billions, which was such a wonderful family to be a part of, I was still definitely on the periphery; as Season 2 went on, they wrote a bit more for me. The way it was scripted, Deb wasn’t supposed to know an awful lot about the inner workings of Axe. The less she knew, the better it was for Bobby. It’s interesting that that, too, leads back to the Poli Sci department. In some way, it’s all connected.

Was there a career path you had in mind when you chose to major in political science?
Like a lot of high school students do, I didn’t know exactly what I wanted to major in going into school. I knew I wanted to minor in theatre, which I did. I picked political science because my parents are political buffs; my dad worked at the UN for many years. So I thought, “Why don’t I venture into this field?” not knowing that it was going to stick.

I went to a performing arts high school in Manhattan [LaGuardia High School of Music and Art and Performing Arts]; I was a drama major. I was very involved in the Theatre Arts department at Stony Brook; I had some wonderful professors there. I knew that acting would be it, but coming from LaGuardia, I didn’t want to spend another four years just focused on theatre. I wanted to branch out and learn a bit about something outside of that world.

Overall, what role would you say Stony Brook has played in your journey?
If you’re lucky, each step of the way, you’ve got someone, whether it be a teacher, a colleague, a friend or a family member to help you through and lead the way for you a bit. Deb Mayo, who was the director of a few of the plays I was in, was really key. She created such a nurturing environment for us as students, and was really open. We knew we could come to her whether it was theatre-related things or other. I credit her with getting me into the [Royal Academy of Dramatic Art], where I went after Stony Brook for grad school. She wrote a really lovely recommendation letter, and you just hope to have people like her along the way.

Where do you see that journey going next?
Well, we go back to She’s Gotta Have It in May; we’ve got a second season on that, and that’s exciting for me to see where that character goes. Each season of a show, new life is breathed in, and you feel like you’ve seen it before, but it’s all brand new. I’m excited about exploring that second season, but I’d also love to do more features. Television is wonderful, and I’m so lucky to be here in New York with this cast we have on “Deception,” but the hours are grueling, and it’s a real grind, not that film is an easy world, but it’s definitely a different kind of hustle, and I’m looking forward to doing that a little more, too, when time permits.