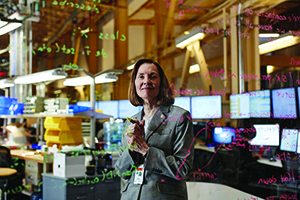 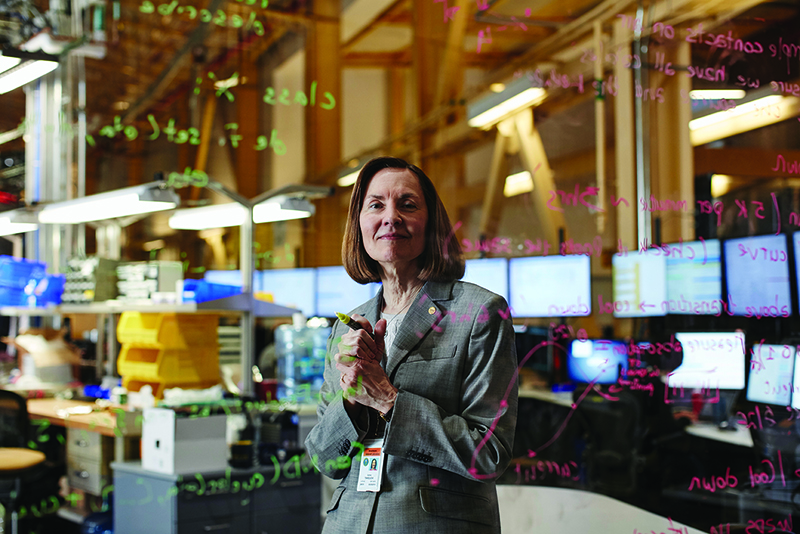 From cell phones, computers and cars to kids toys, remote controls and other utilities, batteries big and small can be found everywhere on Earth — including our landfills.

Esther Takeuchi, professor in the College of Arts and Sciences’ Department of Chemistry and the College of Engineering and Applied Sciences’ Department of Materials Science and Chemical Engineering, aims to curb that pollution with the following question: Is it possible to develop an energy storage system that can lead to a more sustainable Earth?

Takeuchi — who holds a joint appointment at Brookhaven National Lab and Stony Brook University, is credited with more than 150 U.S. patents and developed the battery technology that implanted cardiac defibrillators employ today — is directing a U.S. Department of Energy $10 million Energy Frontier Research Center award to drive her research in alternative battery systems that aren’t dangerous to the environment, but still boast high-energy, power and lifespan capabilities.

It’s this innovative research that Professor Takeuchi has pursued since her arrival on campus in 2012, and why she was recently named the inaugural William and Jane Knapp Chair in Energy and the Environment.

Alumna, donor and long-time friend of the University, Jane Knapp ’78 pointed out that to educate the next generation well, Stony Brook needs to attract great faculty members engaged in leading-edge research who will transfer that knowledge to students and peers. Offering endowed professorships and chairs attracts these top minds to Stony Brook. “Our hope is that other alumni and people in the community will feel the same way and see the obvious good,” she said. “Without funding, these things are not going to get done and the world would be a very different place.”

“Dr. Takeuchi’s work and revolutionary products directly impact the world we live in,” said President Samuel L. Stanley Jr. “While the Knapp gift allows Esther and her team flexibility in their research, it also provides a first-class learning environment for student researchers.”

Takeuchi plans to use the funds donated by the Knapps to help her team — which she proudly pointed out is comprised of 50 percent women — attain preliminary results needed for future proposals.

“Having some amount of funding that is, in a sense, not directed toward any specific project but directed toward another area of the field allows us to be more creative, to take a little more scientific risk to test ideas,” Takeuchi said. “Energy storage and the environment are linked. You can’t have one without the other, and if we’re attuned to both, then we can advance both.”

Housed in Stony Brook’s Advanced Energy Research and Technology Center within the Center for Mesoscale Transport Properties (m2m), she and her team — consisting of world-class researchers and Stony Brook graduate students who carry backgrounds in chemistry, material science, electrical engineering and physics — are expecting to find new energy storage alternatives by studying the two most basic products of all energy, work and heat.

Takeuchi used magnetite, a naturally occurring iron oxide, as an example of a potential material they’re studying that’s Earth abundant, relatively available and cheap. “If you had a battery that used magnetite and there were some kind of event, the magnetite is not going to be an environmental disaster, it’s not a highly toxic and damaging material,” she said.

If successful in making magnetite function to its theoretical capacity, the material would be about three times better than the electrodes used in common lithium ion batteries today.

Aside from the revolutionary product Takeuchi and her team work relentlessly for, the benefits to student researchers are immediate. “One of the great things about Stony Brook is its relationship with Brookhaven National Laboratory,” Takeuchi said, where Stony Brook graduate students have the opportunity to work with state-of-the-art equipment and experts crucial to the development of cleaner and environmentally friendly batteries, like the synchrotron or electron microscope.

Though students come from different research backgrounds, the collaboration they find under Takeuchi’s supervision is crucial to not only their development as future scientists, but the research itself. “I really think scientific collaboration is where some of the new frontiers are,” Takeuchi said. “Each discipline is continuing to push forward, but sometimes it’s at the boundaries between the disciplines that you can really make breakthroughs.”

“The long-lasting impact Jane and Bill Knapp have had and have on our programs at Stony Brook transfers over into the research of top faculty members like Esther Takeuchi and continues to inspire the intellectual endeavors of our students,” said Senior Vice President of University Advancement Dexter A. Bailey Jr. “With incredible technology and a very talented group working alongside her, I expect we can look forward to many substantial, meaningful discoveries to come.”