Cocaine and Colonization: Stony Brook Professors Meet at the Crossroads of History and Biology

While their paths had crossed in the past, it was a chance meeting on the Long Island Rail Road that brought two Stony Brook faculty members together on a new level of interdisciplinary collaboration. Liliana Dávalos, a professor in the Department of Ecology and Evolution, and Paul Gootenberg, SUNY Distinguished Professor of History and Sociology, collaborated on a topic of mutual interest — the origins of cocaine. The project? Co-editing a book.

That’s right — a historian and a biologist co-edited a book.

The Origins of Cocaine: Colonization and Failed Development in the Amazon Andes (Routledge), released in 2018, June, examines how in the 1960s, the governments of Colombia, Peru, and Bolivia developed agricultural settlement programs in each country’s Amazonian frontier lowlands. By the late 1980s and early 1990s, those same zones had become centers for the growing illicit cocaine trade.

Gootenberg, who is also chair of the Department of History, is the author of several books, including Andean Cocaine: The Making of a Global Drug (2008), before co-editing The Origins of Cocaine.  He is considered one of the world’s best-known historians on the history of cocaine. Dávalos has advised the United Nations Office of Drug and Crime on deforestation since 2017 and co-authored the 2016 World Drug Report.

In contributing along with five other authors to The Origins of Cocaine, the two Stony Brook professors found common ground on an academic topic, broadening one another’s perspectives on the illicit cocaine boom of the Americas.

“Liliana and I met serendipitously about 10 years ago,” said Gootenberg.  “She mentioned that she had a side interest in coca and deforestation. We later applied for a couple of grants together and hosted a symposium mainly about the campesinos who grow the coca plant in the Amazonian region.”

Familiar with Gootenberg’s work, Dávalos realized the two professors might be converging in their respective research regarding the Andean countries vast production of illicit coca since the 1970s.She had spent many hours poring over books and journals from the 1950s through the 1970s, trying to understand the origins of the problem.

The day she encountered Gootenberg on the train, Dávalos mentioned that she was about to publish an elaborate quantitative analysis to figure out the relationships between locations of historical land colonization projects in the Andean tropics and hotspots of coca plantations today.   Some of her findings were coming out in the UN World Drug Report.  Gootenberg immediately realized they were on the same page.

“All my years of research on land use and deforestation came in handy with the UN report because I wanted to take a look at not just the Andes, but also the highlands of Southeast Asia as well as Afghanistan,” said Dávalos.

“At this point we were working on exactly the same problem,” added Gootenberg. He was further impressed that Dávalos was asked to be an environmental advisor on the World Drug Report, a publication that is read by hundreds of specialists and throughout the global public sector. Gootenberg told her he had read the 2016 report and found it fascinating that the UN had suddenly changed its position on the environment:   development not drugs by itself was the source of harm in such biodiverse regions. He only realized later, however, that the reason the UN had changed its view was because of Dávalos’ findings.

By this time, Gootenberg had assembled a team that included a historian, a geographer, a sociologist, and a political scientist to do a series of similar case studies on development projects and drugs in Bolivia, Peru and Colombia.

“I realized that what I was trying to show in a comparative, empirical and archival way, Liliana had already proven in a much more succinct, quantitative and direct way,” said Gootenberg. “At that point, we decided to join forces.”

By that time, Dávalos had already devoted a decade to trying to understand through math and quantitative models what effect the coca plantations were having on the forest.

“On one hand, you might say people planting coca in the forest are destroying it,” said Dávalos. “On the other hand, if they weren’t planting coca they’d have cattle that would require a lot more space. So in that respect, coca was thought by some to actually have a positive effect.”

Both professors are deeply interdisciplinary scholars drawn to issues of contemporary concern, such as drug policy and tropical forest conservation.

“We found a broad bridge of convergence in our shared sense of historical social science,” said Gootenberg. “Mine is informed by archival historical case studies and sometimes larger social theory questions and Liliana’s is by the forest, geography, labor and land use, and quantitative and spatial methodologies.”

Where the pair found total agreement is in a critique of the overarching themes of “lack of development” and “isolation from the state,” which Gootenberg described as the commonplace policy assertions about why illicit economies flourish. In fact, he notes, “cocaine was born from failed development projects and collapsed state interventions.”

Gootenberg contends that when these mid-century Cold War modernization projects collapsed, they left the seeds of illicit cocaine trades in tropical Bolivia (the Chapare region), eastern Peru (the Upper Huallaga Valley) and lowland Colombia (Meta, Putumayo), something that also occurred in other drug zones of the global south.

He also pointed out that it is critical to question the artificial divide between illicit and legal or legitimized capitalist economies.

“They go together, they overlap, move in cycles and can spur one another, much like smuggling and commerce have for centuries,” said Gootenberg. 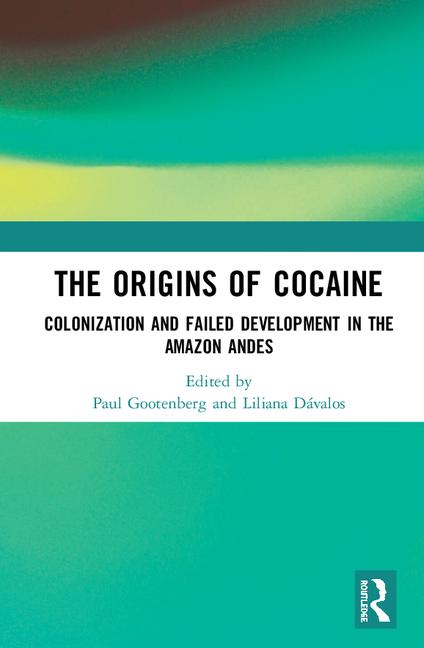 Dávalos said that it is “unhindered development,” not the drug trade on its own, that is destroying what is left of the western Amazon. She gives as one example the vast cattle ranches and corporate plantations that have replaced small-holder coca crops in parts of Colombia.

This is an area where the professors are in agreement — how the big push for development set the stage for what has happened and how future policy can be reshaped in the region.

Dávalos said she has always wanted to collaborate with researchers who have radically different backgrounds, offering that “it’s exceedingly rare for different disciplines to examine a similar problem and draw parallel conclusions with social issues such as this.”

She said she welcomes the outcome because by presenting dual perspectives, she and Gootenberg can reduce scientific jargon and explain what the terms and perspectives mean across disciplines.

Who will be most likely to read and heed the message in The Origins of Cocaine?

“I’d be delighted if my closest scholarly colleagues and students in Latin American history all read the book,” Gootenberg said. “But I suspect its specialized and pointed message will actually appeal more to experts and practitioners in the larger development and drug policy communities.”

Gootenberg and Dávalos presented their book at Stony Brook University in October; previously, they had  presented their findings to the Washington Office on Latin America, located in the nation’s capital, and will hold comparable workshops this year at the Soros Foundation and Drug Policy Alliance, both based in New York City.

“We’re eager to connect with these takeaways with NGOS and development and drug agencies,” said Gootenberg. “They’re listening.”