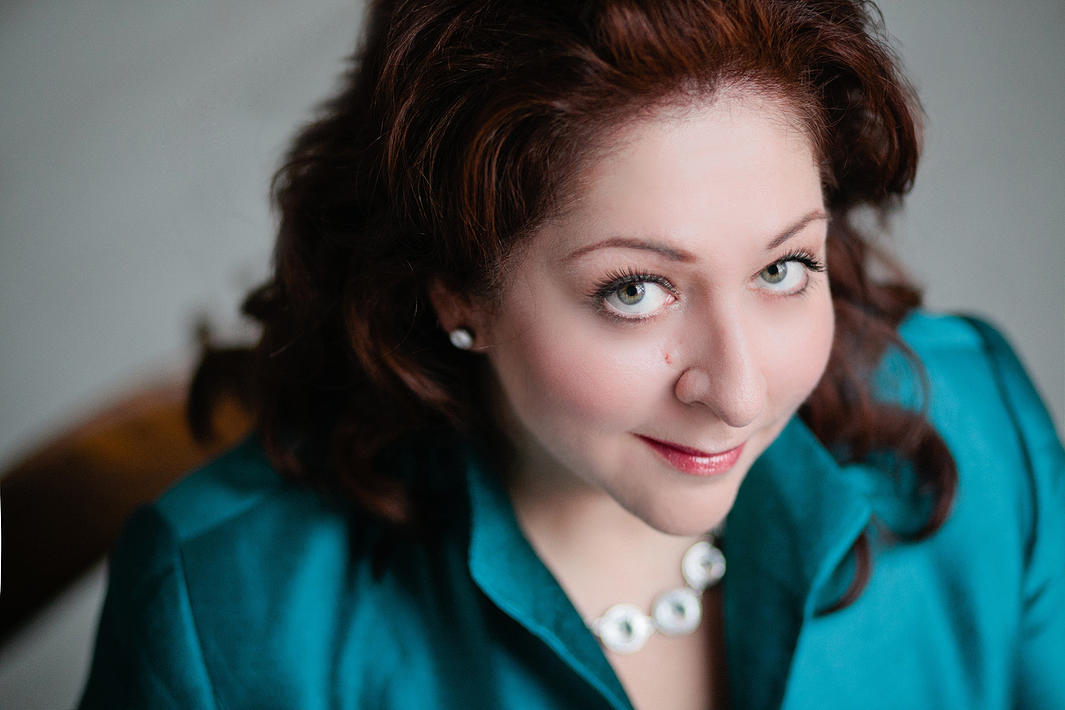 Composer Peter Winkler recalls a moment teaching music theory at Stony Brook in the early 1990s when he and his students were analyzing Alban Berg’s modern masterpiece Wozzeck. One young woman in his class was entranced by the celebrated aria — a lullaby to her infant son — sung by the character Marie, whose murder by Wozzeck concludes the work. Marie’s lullaby is a rare interlude of tonality arising from a harsh, wrenching score, and the role requires an uncommon combination of musicianship, acting ability and vocal art.

Winkler wasn’t laughing for long. As he soon discovered, this sensitive student who was drawn to dark and complex musical theater already possessed the raw material of one of the most ravishing and expressive sopranos of her generation.

Christine Goerke Holloway ’94 has not yet performed in a Wozzeck, but the earthy, tormented Marie remains a role she is determined sing. Wagner’s Isolde is another. These are among the great mountainous challenges for a category of voice that the German “Fach” system designates Hochdramatischer Sopran— colloquially: the Wagnerian soprano.

A Talent Worth Nurturing

Goerke began her performing career in the lighter, more populated niche of lyric coloratura, but she has recently begun to assail the peaks of the high dramatic canon to ovations and raves in the world’s most prestigious opera houses. Peter Gelb, artistic director of the Metropolitan Opera, told the New York Times that Goerke had received “one of the great ovations I have heard in recent years at the Met” in a Strauss performance in November. The New Yorker’s influential music critic Alex Ross titled recent dispatches on his website “Goerke Ascendant” and “Goerke Triumphant.”

Remarkably, Christine Goerke did not begin her musical studies at SUNY as a singer. The Long Island native’s instrument was the clarinet, and her ambition was to teach, not perform professionally. But by the time she had transferred to Stony Brook, “Christine knew her own worth,” says David Lawton, one of her University mentors. Goerke was determined to get herself heard by the faculty, Lawton recalls, and her efforts paid off: she soon drew notice from Elaine Bonazzi, the renowned mezzo-soprano who, happily for Goerke, was serving as Performing Artist in Residence at that time.

“I was incredibly lucky to have been in such a nurturing place,” Goerke says. “The teachers looked out for me in ways that I couldn’t possibly have hoped for.”

As training shaped her talents rapidly into formidable skills, Lawton cast her in lead parts in her first Stony Brook productions. She sang Asteria in Handel’s Tamerlano and Fiordiligi in Mozart’s Così fan tutte — a prima donna showpiece complete with dazzling vocal fireworks.

“Even as a student Christine had not only an exceptional voice, but also first-rate musicianship, and a real natural instinct for the stage,” Lawton explains. “Her performances of these roles were absolutely brilliant, and it was no surprise to any of us that immediately after her graduation from Stony Brook she was accepted into the Young Artists Program of the Metropolitan Opera.”

Up and up Goerke’s star rose through the ’90s and into the ’00s with captivating interpretations of the baroque and classical repertory: Gluck’s Iphégenie en Tauride (a role she’s recorded) at the now defunct New York City Opera, which made her and the baritone Nathan Gunn household names to opera buffs; another Cosi Fan Tutte with the superstar mezzo Joyce di Donato at Houston; Bellini’s beloved, arduous Norma outdoors under the big desert sky at Santa Fe, to which she would return quickly for Handel’s Agrippina, earning herself a reputation as a uncommonly able singer-actor. In 2001, she won American Opera’s highest honor, the Richard Tucker Award.

But Goerke’s seemingly unstoppable trajectory was about to stall. In the early years of the new century, vocal growing pains caught her off guard, and several consecutive outings were troubled by signs of strain and struggle. A shaky 2003 run at the New York City Opera in Handel’s Alcina capped Goerke’s fears that she had somehow ruined or lost her instrument, as she later recounted to Opera News: “I couldn’t find my voice… I tried to work my way through it, but it was just wrong. And finally I thought, ‘Okay, I broke it.’”

Her husband’s encouragement carried her past a fleeting notion to retire to teaching and finally sent her to her friend, the soprano and established vocal coach Diane Soviero, for what turned out to be career-changing guidance. The press called the transitional turbulence a “vocal crisis,” but the truth was that her big Hochdramatischer voice, which had been audible in the power of her sound from her first days on the stage, had begun to break out of the chrysalis.

Forward she went, and her ordeal has only made her personal narrative, in operatic-heroine style, more deliciously fairytale and worthy of Diva legend.

For a singer who began her career in the gentler musical climes of Mozart and Handel, everything about these dramatic heights feels a little heady — including the fans. “Strauss and Wagner fans are a different breed unto themselves. I know, I’m one of them!” she says. “I find that they are a bit more fanatic.” Performance on this level can be an unnerving experience, but it’s satisfying to know that the music world’s most discerning audiences have lifted you to the top of the art.

Goerke’s breakout performance is already aficionados’ lore. Last fall, her return to the Metropolitan Opera house after “the crisis” saw her undertaking the most daunting role she had ever sung there — the Dyer’s Wife in Strauss’ fanciful Die Frau ohne Schatten.

Stepping out for her curtain call after opening night, Goerke was hit with an ovation so thunderous it made her burst into tears. “A Fairytale Opera leads to a Fairytale Career Break” ran the New York Times headline. The Met quickly announced it will revive a controversial Ring Cycle production to showcase her first Brünnhilde.

After such a brilliant ascent, Goerke is hovering in her vocal heavens for the moment with Strauss, whose music loves her as much as she loves it. Chicago, London and Sydney have been dazzled by three different, unique and intense interpretations of the composer’s Elektra, a tormented, irascible heroine that Goerke is also now booked to sing soon for the Met.

This summer, more Strauss, with Goerke singing the title role in Ariadne auf Naxos at Glimmerglass in Cooperstown, New York, where her Gluck Iphégenie won her some of her earliest devotees. “I will be very curious to know how it feels, to be back on that stage after over a decade,” she muses.

She’s sung Ariadne to acclaim in a large house, and notes that “it will be a different situation singing Ariadne in a 900-seat theater. We will all find our way as we rehearse. I love the idea of being in a theater that I can see every single face in the audience for a piece like this. Ariadne has a chamber orchestra, so it’s quite a good choice for this festival. The immediacy of the orchestration, combined with the nearness of the action? I suspect it will make for an incredibly fun evening!”