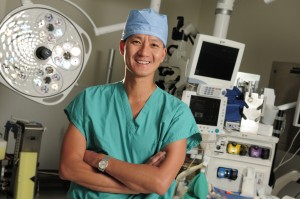 Both a neurosurgeon and a neurointerventionalist, Henry Woo, MD, is internationally known as a practicing physician, clinical researcher and developer of medical devices. He also directs the Stony Brook University Neurosciences Institute’s Cerebrovascular Center.

Dr. Woo’s research interests and patents involve developing and studying new ways to image and treat patients with acute stroke and/or brain aneurysms. He heads a clinical research team that is actively enrolling in more than a dozen research trials. His biomedical engineering lab also studies new ways to treat brain aneurysms. He is also the founder of Vascular Simulations LLC, which has pioneered the world’s first Vascular Replication System®. This device enables interventionalists to practice an endovascular procedure with the identical patient specific anatomy and pathology prior to the actual treatment.

Observing a brain aneurysm being repaired during a medical school rotation is what led Dr. Woo to select his field and to dual train. “It was fascinating to me that you could go into someone’s skull cavity, fix a life-threatening problem and witness the person waking up completely cured,” said Dr. Woo. “From that moment on, I knew I wanted to do cerebrovascular neurosurgery. But I was also intrigued by the growing field of endovascular interventions, and its approach to cerebrovascular problems.”

So Dr. Woo decided to do a second fellowship in interventional neuroradiology at New York University and was among the first physicians in the country to become trained in both specialties. The criticism then was “you can’t do both well” because each field requires a different skill set. However, time and experience have disproven that notion. Today, there are about a hundred neurosurgeons with dual training across the country.

After five years practicing at Cleveland Clinic’s Cerebrovascular Center, Dr. Woo arrived at Stony Brook in 2007. At the time, Suffolk County was beginning to grow rapidly, but people with cerebrovascular disease still had to travel at least two hours or so to obtain medical care. He saw a tremendous opportunity to make an impact by helping people get the treatment they need closer to home. Also important were the research opportunities available to him at Stony Brook. And as a native New Yorker, he was happy to come back East to an institution where he could make a significant contribution.

The role of neuron and dopamine loss in Parkinson’s Disease (PD) has long been recognized by neuroscientists. However, how dopaminergic modulation affects brain regions involved in the control of voluntary movement...