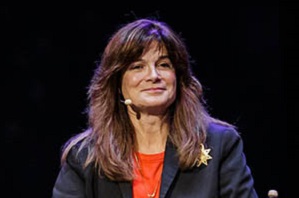 As the Cassini spacecraft plunged into Saturn, Carolyn Porco ’74,  leader of the Cassini imaging science team, eulogized the historic mission on her blog:

The end is now upon us. Within hours of the posting of this entry, Cassini will have burned up in the atmosphere of Saturn … a kiloton explosion, spread out against the sky in a pyrrhic display of light and fire, a dazzling flash to signal the dying essence of a lone emissary from another world. As if the myths of old had foretold the future, the great patriarch will consume his child. At that point, that golden machine, so dutiful and strong, will enter the realm of history, and the toils and triumphs of this long march will be done.

Porco, a 1974 graduate, was granted an honorary doctorate by Stony Brook University in 2009. She served as Director of the Cassini Imaging Central Laboratory for Operations (CICLOPS) and is considered one of the foremost scientific leaders of the 21st century.