Caribbean Bats Would Need 8 Million Years to Recover from Extinctions 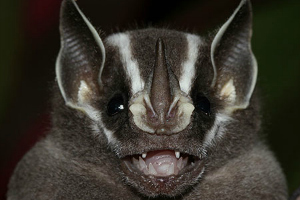 It will take at least eight million years to restore species recently lost to extinction, according to research on New World leaf-nosed bats by Stony Brook’s Liliana Dávalos.

In the Caribbean alone, more than half of the mammal species went extinct after human colonization. Bats are the most diverse group of surviving mammals. Can nature restore the numbers of species on islands to levels that existed before human arrival? How long would it take for nature to regain this lost mammal diversity?

To answer these questions, a research team led by Luis Valente at the Berlin Natural History Museum (Germany) and Liliana Dávalos, Professor in the Department of Ecology and Evolution of Stony Brook University, compiled data on the New World leaf-nosed bats and their close relatives in a paper published in Nature Ecology and Evolution. These bats form an ecologically diverse group that includes the fishing bat, many fig-eating bats, and vampire bats. The group is ideal for studying the effects of recent extinction, as one-third of its species have become extinct in the Greater Antilles over the past 20,000 years.

The research was supported in part by funding from the NSF, the Alexander von Humboldt Foundation, the Brandenburg Ministry of Science, Research and Culture, the German Research Foundation, and the Netherlands Organisation for Scientific Research.