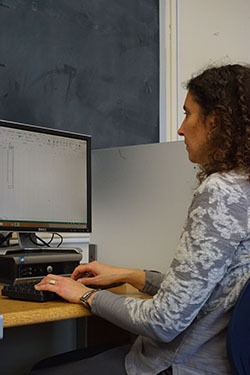 False assumptions made by employers about gender roles, and women’s inclination to avoid conflict in negotiations, are key factors contributing to the longstanding pay gap between men and women, according to a business professor who studies organizational behavior at Stony Brook.

“Furthermore, it’s going to take increased awareness of these factors across industries if that gap is ever going to disappear,” said Julia Bear, an assistant professor of organizational behavior in the College of Business  at Stony Brook University.

“The research I have conducted shows that assumptions about men’s and women’s roles in their families contribute to wage discrimination and the wage gap,” Bear said.

Women’s salaries are still playing catch-up to men’s, and Equal Pay Day, which will be observed on April 10, emphasizes that wage disparity.

Bear, who has researched the role of gender in negotiation and conflict management in organizational behavior, says research shows when two equally qualified male and female job candidates are considered for a position, people were more likely to assume the male candidate was the family breadwinner and offered him a significantly higher salary than the female candidate, who was assumed to be in the traditional role of a caregiver. “My studies show when female job candidates provided explicit information that they are breadwinners, they obtained equal salary offers and were also just as likely to be offered leadership training as compared to men,” she said.

Bear uses a variety of research methods to conduct her studies, including surveys in organizations, experimental studies and qualitative interviews to investigate the factors that influence gender wage gap. Many of her findings have been published in the Academy of Management Review, Psychological Science, Journal of Applied Psychology, Organizational Behavior and Human Decision Processes, Negotiation and Conflict Management Research, and the Academy of Management Best Paper Proceedings.

She also explained that the pharmacy industry had no wage gap while the finance and insurance industry had the largest gap, with women earning approximately sixty percent of what men earn. “According to economics research, men and women earn equal salaries in the pharmacy industry primarily because there is flexibility in terms of scheduling working hours and working extremely long hours is not rewarded,” Bear said. “As long as organizations continue to assume that employees have no other responsibilities than work and continue to reward employees, typically men, who can work extremely long hours, the wage gap will persist,” Professor Bear said.

Negotiation techniques and expectations also contribute to the wage gap between men and women. “On average, women are less likely to negotiate for a higher salary compared to men,” she said.

In the lab, Bear typically pairs up participants and has them conduct negotiation exercises to examine outcomes and report whether results are different between men and women. “To examine perceptions in negotiation, I run studies in which I have participants evaluate videos of male versus female negotiators,” she said.

So, what are the solutions? “We should focus on how assumptions about men and women are contributing to the wage gap and not only put the burden on women to ask for higher salaries,” Bear said.

New York State has recently taken steps to shrink the gap. Gov. Andrew Cuomo has issued two executive orders, one that took effect in January that prohibits state agencies from asking job candidates about their salary history, and a second that takes effect June 1 that requires state contractors to disclose data on gender, race, ethnicity, job title and salary of their employees.

Bear advises women to do their homework to find out what is reasonable to negotiate for, and practice an assertive mindset before the negotiation.

“I believe we would see further progress in eliminating the persistent wage gap between men and women if organizations established policies that offer flexibility and support individuals with both family and work responsibilities,” Bear said. “Another solution could be working to refute traditional assumptions about gender roles, and creating greater transparency in terms of information about salary and salary negotiations,” she said.

Professor Bear received a PhD in Organizational Behavior from Carnegie Mellon University, her MBA from Baruch College-CUNY, and a bachelor’s degree from Stanford University.