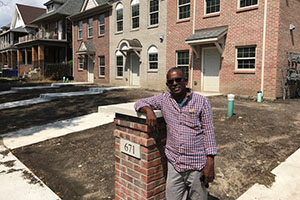 Julio Bateau ’74 was homesick and needed to learn a new language when he found himself transplanted from Haiti to the United States as a sophomore in high school. As the tenth of twelve brothers and sisters, his family moved to New York City incrementally to escape the political turmoil of the Duvalier regime. “My goal was to attend college but because of the need for my parents to help support so many of my other siblings, I knew it would be almost impossible without a scholarship or financial aid,” he recalls.

Fast forward 50 years as Bateau reflects back on a lifetime of making a difference, first as a structural engineer for the Army Corps of Engineers and then as a builder of quality and affordable housing in Detroit. “I’m not sure I could have done it without the scholarship, financial support, and mostly, the education I received from Stony Brook,” he says. “The faculty was very nurturing and helped me get through a tough curriculum that included physics, anthropology, and engineering classes.”

Bateau chose to study math because the language of mathematics is universal and, in comparison to language, the principles easier to understand. Afterwards, he attended George Washington University, where he received a Master’s Degree in structural engineering. He dreamed about returning to Haiti to help improve housing for many of his former countrymen and women, but a prospective landlord in a tough neighborhood in Washington DC convinced him that it would make more sense to invest and renovate property in a low-income community in the city he was living in.

While he didn’t invest in Washington, that conversation remained in his head when he moved to Detroit in 1978 to work for General Motors. Many neighborhoods were rundown and completely empty, and Bateau bought his first house— the original home of the Hudson family of J. L. Hudson Department store fame—on East Ferry Street for $25,000. Eventually, Bateau invested his life savings in buying both sides of a block along East Ferry Street for $150,000. He soon secured a $300,000 bank loan from the Detroit Renaissance Foundation, and began renovating the block one house at a time. He has been improving properties ever since and feels that Detroit, after falling into bankruptcy in 2013, is finally turning the corner.

Bateau’s life took a major turn when he relocated to Haiti in 2010 for two years to help the country recover from a devastating earthquake. He found friends and family in the rubble who had died during the event.

U.S. Air Force was in control of the airport. “The airport project was especially challenging, since my partner, GDG Beton, and I had a 12-hour window to complete a runway so that relief supply planes could land,” he recalls. “Rebuilding the country history, the historic Iron Market in Port-Au-Prince, was the hallmark of our achievement before I returned to Detroit.”

Bateau’s achievements are music to the ears of Fotis Sotiropoulos, the dean of Engineering and Applied Sciences. “When someone like Julio takes some of what he has learned at Stony Brook University and goes out into the world and applies it in such a meaningful way, it means everything to the many people here who helped him along the way. His success has been everyone’s good fortune.”