Bello ’89, Other Former SBU Athletes Attain Success in and out of Sports 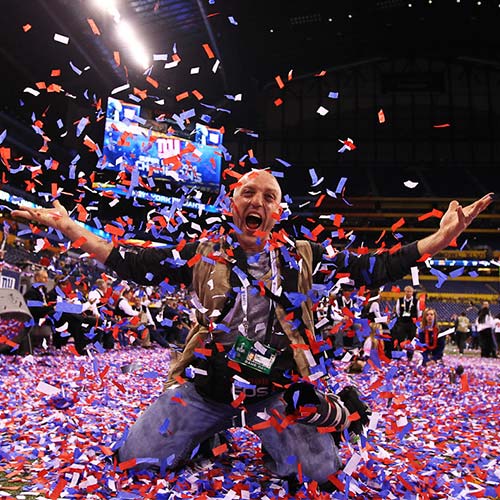 by Kunal Kohli, originally printed in The Statesman

Stony Brook Athletics is no stranger to producing success stories. Just a quick glimpse at the list of alumni will give you names like six-time Major League Baseball All-Star pitcher Joe Nathan and National Football League tight end Will Tye. However, Stony Brook has not only produced stars on the field, but off of it as well.

Getty Images photographer and former Stony Brook Patriot Football player Al Bello is a testament to the program’s goal of producing winners all around. The award-winning photographer has been around sports all of his life, but did not begin photographing them until he was a junior at Stony Brook.

He took an introductory photography class and his passion grew from there, shooting pictures of Seawolves Football for The Statesman in 1988.

“It was natural for me to photograph things that I was familiar with, which was sports. I wound up going to a lot of sporting events that my friends played,” Bello said. “The connection I had with the people I photographed and their emotions of when they looked at a picture I took stuck with me in a way that made me want to keep doing it.”

Bello was an athlete. He was a scrawny 5-foot-9-inch, 175-pound inside linebacker back when he took the field for the Patriots, before Stony Brook became the Seawolves. He said his proudest moment was just being able to keep up with those surrounding him on the soccer fields the university once had to use for football games.

Now Bello is part of a community that cheers on the Seawolves. He follows them through the media and keeps in touch with his old coach, the current Director of Athletics Advancement and Alumni Relations, Sam Kornhauser.

But, as Bello said, the relationship goes both ways. Sometimes the university fuels an athlete. That was the case with Chris Algieri.

During his time at Stony Brook, Algieri was not part of Athletics. Rather, he trained in kickboxing and went professional at 19 years old. He was also a health science major, trying to make his way at college.

Before his fight against Manny Pacquiao on Nov. 22, 2014, Algieri went to a Stony Brook football game where fans surrounded him. Not just Stony Brook fans, but Algieri fans. While he was not necessarily an athlete for the school during his years there, he represented it after he graduated.

However, the Mastic Beach native found a new home in Montclair State University. She then went on to coach Fairleigh Dickinson at the Florham campus and Adelphi, and became the winningest coach in St. John’s history. Barnes Arico then went on to become Michigan’s head coach.

Some former Stony Brook student athletes do not necessarily venture into the world of sports. Billionaire Glenn Dubin is an alumnus of Stony Brook’s Football program. Dubin was once a running back for the team before its mascot became the Seawolf, and also played on the lacrosse team.

Dubin has used his fortune to improve his alma mater, donating $4.3 million to construct the Dubin Family Athletic Performance Center. He and his wife pledged $5 million to the creation of an indoor practice facility for the Seawolves.

Not only does he contribute to the athletic program through funding, Dubin is also a regular at football and men’s lacrosse games.

For adjunct professor Burton Rocks, giving back means inspiring students in the same manner that he was inspired. The author-turned sports agent turned professor said he has been inspired by the university time and time again.

Rocks got his start at Stony Brook through the Honors College. He honed his writing skills and, once he was two years removed from law school, collaborated with the late-Clyde King on “A King’s Legacy: The Clyde King Story.” After that, he wrote eight more books and dedicated himself to becoming a sports agent.

He found his passion, just as Bello and so many others have.

“I had no clue going in [to Stony Brook] what I wanted to do, I just liked playing football,” Bello said. “I left with an ambition.”