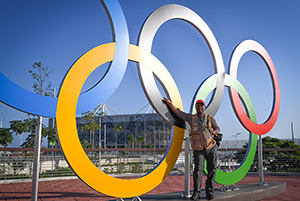 In Rio de Janiero, gymnast Simone Biles earned more gold medals in a single Olympics than any other female gymnast in American history. She dazzled the world in each of her events and Bedel Saget ’88, multimedia and graphics editor at The New York Times, was there to capture every move of her stunning performances.

Now, his coverage — The Fine Line: Simone Biles Gymnastics — is being recognized at the World Press Festival this month in Amsterdam.

“I’m very honored to accept such a prestigious award on behalf of the talented team of journalists, videographers and designers that contributed to the success of The Fine Line series,” Saget said. “Inspired by Snapchat and mobile viewing habits, we set out to create a new type of viewing experience that provides our viewers a deep look at the athletes they want to learn about and explain the physics and technique behind their extraordinary performances.”

The Simone Biles feature won second prize in the category of Immersive Storytelling. Off platform, a linear video version of the Biles piece engaged more than 60 million people on Facebook and can be found here.

Robert Stafford ’72, ’82, president of the Stony Brook Alumni Association, congratulated Saget — who is also president-elect of the Association — on the recognition. “Bedel never fails to showcase the tremendous expertise, talent and professionalism so inherent in Stony Brook graduates,” he said. “Nobody is more deserving for their continued hard work and dedication.”