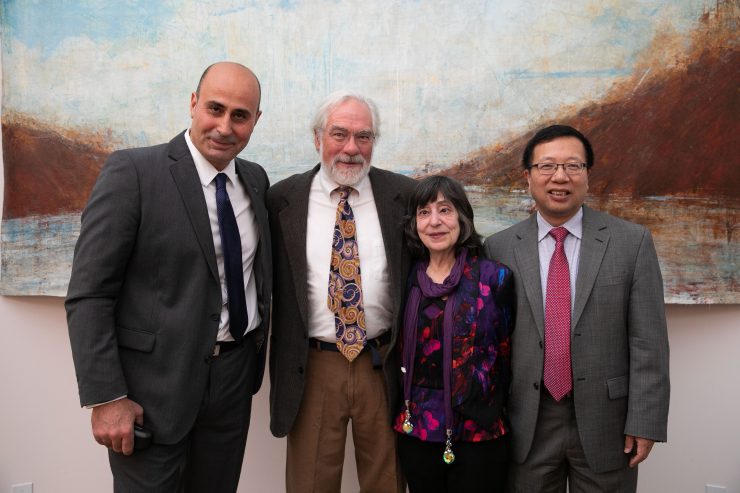 What does it mean to be an endowed professor?

For Bassem Allam, formally invested on April 26 as the Marinetics Endowed Professor in Stony Brook University’s School of Marine and Atmospheric Sciences (SoMAS), it means the freedom to follow his instincts as a scientist, pursuing knowledge that can help protect and restore marine resources without worrying about securing funding.

“Having this endowment has really allowed me — and, by extension, my graduate students — to take more risks in our research,” Allam said of his endowed professorship, “knowing that we have funding to repeat an experiment, or to do more work than was scheduled in any grants we have.”

Allam’s research is centered on interactions between marine mollusks and waterborne microorganisms in general and, in particular, the framework of host-pathogen interactions. Specifically, Allam has done extensive work with clams and their reactions to Quahog Parasite Unknown (aka “QPX”), a protozoan microbe that affects clams in waters from eastern Canada to the Mid-Atlantic region, and severely impacted New York clam harvests in the 2000s. In recent years, Allam has found funding from the endowed professorship invaluable to his efforts, illustrating the importance of endowed professorships for his research and other scientific endeavors.

“For years,” Allam said, “we didn’t understand how the clam responds to the infection. With the endowment providing additional resources, we were able to sequence the genome of the hard clam. We didn’t have any grant money to do it.

With the genome sequenced, Allam and his colleagues are able to advise farmers on selective breeding, improving the clam population’s overall resistance to QPX.

Allam has also used resources from the endowed professorship to connect and collaborate with colleagues across the globe. He recently published a paper with researchers in Italy, using data mining to discover new viruses affecting shellfish, some widespread and others localized to a particular region.

“There’s lots of data sets people generate in their labs and put in repositories of data,” Allam said. “In that data, there is information about viruses that affect these animals, and people don’t look at them, because it’s a small amount of the data. So, we went back, examined that data, and we did the mining of that information and discovered information about several new viruses in that data set.”

Allam’s work perfectly reflects the interests of Laurie Landeau and Robert Maze, an aquatic veterinarian and a PhD in ecological parasitology respectively, whose gift created the Marinetics Endowed Professorship. The endowed professorship continues a long and productive relationship between Landeau, Maze, and Stony Brook that began when Landeau brought the Aquavet program to the University’s Southampton campus.

Since that initial connection, Landeau and Maze have supported SoMAS through the establishment of the Shinnecock Bay Restoration Program, the Maze-Landeau Fellows Program, the Minghua Zhang Early Career Faculty Innovation Fund and the Dean’s Fund for Success. As their relationship with SoMAS and Stony Brook as a whole has grown — Maze chairs the SoMAS Dean’s Council, while Landeau is Vice-Chair of the Stony Brook Foundation Board — their leadership and continued confidence in the School are made even more meaningful by their deep knowledge in the field.

For Stony Brook Interim Provost and Senior Vice President for Academic Affairs Minghua Zhang, who was dean of SoMAS when the Marinetics Professorship was established, that leadership has made a world of difference.

“For a long time, the School of Marine and Atmospheric Sciences had no endowed professorship among the tenured and tenure track faculty,” Zhang said. “We were an outlier among schools of similar national and international reputations.  It was Laurie and Bob who changed this.”

In formally investing Allam, Landeau and Maze took time to recognize the value of his contributions.

“Bassem Allam is someone we’ve known for a long time and whom we admire greatly,” Landeau said. “What I always hear is how great a mentor he is, and think if any of his graduate students were up here, they’d say the same thing, that he’s not only a great scientist and a leader in terms of the health of the waters around here, but that he’s also a great graduate student mentor.”

“Bassem is a great example of the nurturing, enlightening and rigorous environment that SoMAS perpetuates,” Maze added.

That enthusiasm is shared by Zhang’s successor as Dean of SoMAS, Paul Shepson.

“Prof. Allam brings great credit to Stony Brook University and SoMAS,” Shepson said. “His work on shellfish ecology, physiology, pathology, immunology, and genetics reflect Bassem’s commitment to excellence and to conducting research with great societal value.  We are grateful to Drs. Landeau and Maze for their generosity and foresight, and delighted about the recognition that comes with this endowed professorship, and the impact it will have, enabling Bassem to explore and extend his scholarship, and creativity, taking him, we trust, far beyond.”

By the same token, in their continued support of SoMAS, Maze and Landeau exemplify the difference that informed support can make in advancing vital research.

“Support for vital research scholarship is particularly meaningful when it comes from a place of deep knowledge and genuine commitment,” said Stony Brook University Interim President Michael A. Bernstein. “We are grateful for — and honored by — the support that Laurie Landeau and Bob Maze continue to provide to Stony Brook and our School of Marine and Atmospheric Sciences, including the Marinetics Endowed Professorship.”

As he continues his work as the Marinetics Endowed Professor, Allam is eager to continue making the most of the resources afforded to him by his position.

“I’m looking forward to taking more risk across the board,” Allam said. “Hopefully, this position will enable discoveries where the risk is high, but the return on investment is also high.”