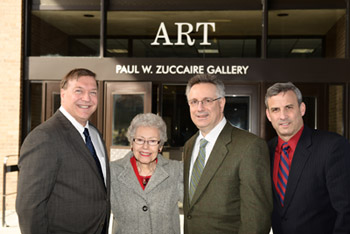 STONY BROOK, N.Y., April 9, 2013 – The Stony Brook University Art Gallery was newly dedicated as the Paul W. Zuccaire Gallery on April 4, 2013, to coincide with the anniversary of the late Paul Zuccaire’s birthday, and in appreciation of the past support as well as recent commitments of daughter Alice Jean Zuccaire and the Paul W. Zuccaire Foundation, the latter of which will be matched by the Simons Foundation Challenge Grant.

The Paul W. Zuccaire Foundation was founded in 1999 by Estelle Zuccaire in loving memory of her husband. Its mission is to perpetuate the memory and spirit of Paul W. Zuccaire through the encouragement, promotion and support of the arts, education, health, humanitarian and other related activities.

A French immigrant who arrived at Ellis Island with nothing, Paul Zuccaire created his own success by founding two insurance companies and other insurance businesses, and came to be recognized as a pioneer in the field.

“We could not be more proud than to have such a magnificent person’s name forever attached to this important space,” said University President, Samuel L. Stanley Jr., MD. “The Paul W. Zuccaire Gallery is such a vital part of Stony Brook’s culture. It provides the highest quality of artwork and entertainment for not only the Stony Brook campus, but the community at large.”

Over the course of the last 28 years, the Gallery has exhibited the works of notable artists as Yoko Ono, Larry Rivers, Roy Nicholson, Elizabeth Murray and Philip Pearlstein. It is home to the Stony Brook Senior Show, which features the work of the undergraduate arts majors, and it is also the venue for the annual MFA show, where talented candidates for masters in fine arts are able to display their artwork in a beautiful, professional setting.

“I am filled with pride and overwhelming gratitude by your honoring my father with your presence here today,” said Alice.

Director of the Staller Center for the Arts Alan Inkles stressed his appreciation and gratitude to Alice and her father’s foundation, noting: “Your tremendous support over the past years as well as your commitment to ensure the future of this gallery, both personally and through grants from the Paul W. Zuccaire Foundation, is truly transformational. We thank you from the bottom of our hearts.”

The University’s Vice President for University Advancement Dexter A. Bailey Jr. said, “Philanthropy creates boundless opportunities for our deserving students. The Zuccaire Foundation’s support opens up the wonderful world of art appreciation for so many to enjoy for years to come.”

The Stony Brook University Staller Center for the Arts offers a wide variety of world class performances from September to May, with the acclaimed Stony Brook Film Festival taking place in July.

About Stony Brook University
Part of the State University of New York system, Stony Brook University encompasses 200 buildings on 1,450 acres. Since welcoming its first incoming class in 1957, the University has grown tremendously, now with more than 24,000 students and 2,200 faculty. Its membership in the prestigious Association of American Universities (AAU) places Stony Brook among the top 62 research institutions in North America. U.S. News & World Report ranks Stony Brook among the top 40 public universities in the nation and Kiplinger named it the 22nd best value in public colleges for in-state students and 9th for out-of-state students . One of four University Center campuses in the SUNY system, Stony Brook University co-manages Brookhaven National Laboratory, putting it in an elite group of universities that run federal research and development laboratories. As the largest single-site employer on Long Island, Stony Brook is a driving force of the regional economy, with an annual economic impact of $4.65 billion, generating nearly 60,000 jobs, and accounts for nearly 4% of all economic activity in Nassau and Suffolk counties, and roughly 7.5 percent of total jobs in Suffolk County.