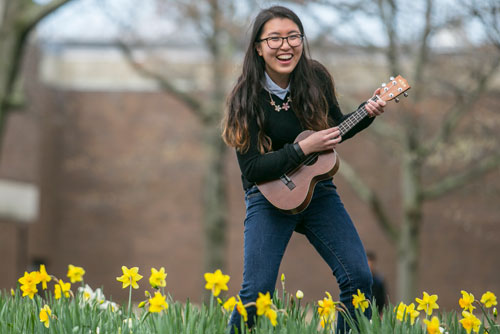 In the highly unlikely event that Ariel Yang’s dream career in medicine doesn’t work out, she she could always fall back on comedy.

Nearly everything about Ariel ’15, including the origin of her English name, generates a punch line. As she says with a healthy degree of understatement, “Though I take my work seriously, I try not to take myself too seriously.”

Ariel, the 2015 Stony Brook University valedictorian with a 4.0 GPA, was 3 1/2 years old when she came to the United States with only indistinct memories of Taiwan, such as the flowers on her grandfather’s balcony and the taste of goat milk.

Needing an English name but having nothing that remotely resembled her Chinese name of Hsin-Tzu, her parents asked the impressionable pre-schooler what she wanted to be called.

“Since The Little Mermaid was my favorite movie, there was no question — I wanted to be called Sebastian,” Ariel said. Luckily for me, my parents figured out that Sebastian was generally a male name, so I settled for Ariel. To this day I thank God that my favorite movie wasn’t Snow White or Popeye.”

Ariel emigrated to the United States because her father, a manager at a semiconductor firm, was transferred to the company’s New York branch. The family settled in Stony Brook because of the reputation of the Three Village School District. Her mother went on to acquire a master’s in teaching at Stony Brook University and now teaches math at the Stony Brook School, a private area school.

Because her family did not have cable TV, Ariel read everything — mostly scientific — she could get her hands on. She watched a lot of DVDs, and as a child dreamed of becoming an actress or a judge on a food reality show before setting her sights on becoming an astronaut or a surgeon.

“I gave up my astronaut dream because of my unwillingness to exercise,” she quipped. Ariel then became serious about the idea of a medical career, excited by the prospect of an undergraduate degree in biomedical engineering, followed by Stony Brook’s Engineering Scholars for Medicine program, an eight-year track that offered her a guaranteed slot in the School of Medicine.

Choosing this program, which is administered through Stony Brook’s Honors College, enabled her to earn her biomedical engineering degree in three years, while squeezing in a two-year bible school sabbatical without jeopardizing her medical school admittance. Qualifying for financial aid allowed her to study abroad at Yonsei University, one of the “Big Three” universities in South Korea, conduct research in a paid summer fellowship and still help support her family financially.

“My reality was dictated by being the youngest daughter of a recent single-parent household and the financial obligations that came with a mortgage, a sister in nursing school and a recently unemployed, estranged father,” Ariel said.

While taking a course in Seoul, South Korea, last summer, Ariel felt her resolve to be a surgeon waver in favor of a career in medical sociology.

“I learned that a woman’s ability to control her reproduction can affect how much education she receives and how much control she has over her life,” Ariel said. “Though my ambitions are not focused yet, I know I want my medical work to empower women in situations in which they stand at a significant disadvantage.”

Ariel was the childhood friend of Evan Frohman, the son of Stony Brook University alumni Mike Frohman and Stella Tsirka. When they learned she would be attending Stony Brook as a biomedical engineering major, they recommended she pursue her research in Clinton Rubin’s lab. Because Rubin and Professor Ete Chan keep the atmosphere light with their frequent jokes, Ariel said she feels right at home in their lab.

“I jumped at the chance to do readily translatable research on common diseases like obesity and osteoporosis,” Ariel said. “I love the research I do because as an Asian woman, osteoporosis is a threat looming in my future, giving me a personal stake in understanding it better,” said Ariel. “The elegance of the connection between obesity and bone loss is beautiful; a certain type of stem cell can choose to become a few different types of tissue, including fat and bone. Our lab found a few years ago that vibration can tip the decision of that stem cell in favor of producing bone and reducing fat, but how? That’s the exciting part of my lab’s research.”

When academic stress becomes overwhelming, Ariel finds relief in making music. She volunteers to play piano at her church services and sings alto with the church group “NYC Young People.” In her freshman year, she started learning to play the ukulele— sometimes to comic effect — and has begun taking singing lessons.

But there is one subject in which she never sees humor — sexism. “I remember the first time I told a surgeon that I wanted to be a surgeon as well,” said Ariel.

“I was 15 and he laughed in my face. ‘You, a surgeon? Do you know how heavy the limbs of an anesthetized patient are? Do you have the muscle to do it?’ ”

Ariel’s advice to women who have goals that fly in the face of the status quo? ”Laugh at the people who laugh at you, because you’ll have the last laugh in the end.”

For now, Ariel, the 2015 Stony Brook University valedictorian with a 4.0 GPA, has the last laugh.