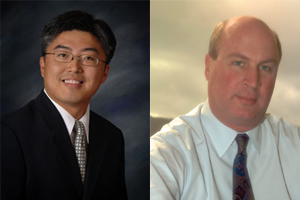 With nearly 20 years of experience as a technology executive and entrepreneur that started with a computer science degree from Stony Brook University’s College of Engineering and Applied Sciences, Eddie Shek ’90 sees all too well the increasingly vital role that artificial intelligence (AI) already plays in modern life.

“I think AI is a much bigger part of our world than most people realize,” said Shek, the Chief Strategy Officer at TrackX, a leading enterprise asset management company. “People talk and think about self-driving cars, for example, but every time you go on YouTube, AI is already part of everybody’s day-to-day interactions, especially relating to the internet and computer systems.”

And, while recent events involving self-driving cars, for example, have given consumers pause and led to questions about the pace of growth in AI technology, the reality is that the questions that need to be answered are much bigger.

“One of the questions that we have to ask is, is it really a good thing?” Shek said. “The AI algorithms or the goals that are defined by this deep learning, are they good goals? How do you really make it effective for people to cooperate with an AI system to alleviate the fear of the doomsday scenario that AI is going to take over the world? I think that’s very interesting research.”

That “very interesting research” will be at the heart of Stony Brook’s Institute for AI-Driven Discovery and Innovation, a new initiative of the College of Engineering and Applied Sciences.  Building on the University’s tradition of excellence in computing and engineering, the Institute is central to the College’s effort to take a leadership role in AI within academia.

“It’s built on a strong foundation,” said Richard Bravman ’78, Chief Strategy Officer at Affinity Solutions, who also holds a degree in computer science from Stony Brook. “The engineering and computer science departments within Stony Brook are strong, so there’s a solid foundation on which to build this initiative. There’s also an opportunity for rich interdisciplinary interactions, not just in the core technology disciplines, but in medicine and lots of other areas that can usefully collaborate with the Institute in thinking about the application of AI.”

While the new Institute was made possible by a State of New York grant that will fund four new positions in AI at Stony Brook, Bravman and Shek are among the initial contributors to the Institute’s seed research fund. Their industry experience is expected to be vital to the impact the new institute will make in the fast-growing and critical field of AI.

“We are launching the Institute for AI-Driven Discovery and Innovation to provide leadership in inventing the exciting technological innovations of the future and educating the next generation of engineers and data scientists,’ said Fotis Sotiropoulos, Dean of the College of Engineering and Applied Sciences. “I am proud of and humbled by the support of high achieving alumni such as Eddie Shek, Richard Bravman and many others. I am confident that with their visionary drive and steadfast commitment to supporting the college, the Institute for AI-Driven Discovery and Innovation will be a resounding success.”

“The most exciting projects in AI start out as crazy ideas,” said Steven Skiena, the founding director of the new institute, “ideas that require building prototypes or doing pilot studies to get them off the ground. This seed research fund will let the faculty in our new AI Institute take chances on new and exciting things, which is where real innovation comes from.”

While the growth of AI has been — and will continue to be — driven by industry, academia has a key role to play as well, according to I.V. Ramakrishnan, associate dean for research and operations of the College of Engineering and Applied Sciences.

“Industry is doing an incredible job in pushing the frontiers of AI,” Ramakrishnan said, “and in particular, the applications of AI. Obviously, they want to do things that have mass consumer appeal, things like driverless cars, Alexa-like assistants. They’re pushing the frontiers of AI in areas that have mass consumer appeal, and they’re doing an incredibly great job.

“I see two areas where possibly academia can focus. One is the fundamental areas, where we can do long-term foundational work. The other possibility is niche applications that may or may not have mass consumer appeal.“

In a white paper outlining priorities for the Institute for AI-Driven Discovery and Innovation, Ramakrishnan identifies four main areas for “grand challenge problems” — focused on the use of AI in health care, infrastructure, education and finance — in addition to five foundational research challenges. These challenges are centered on five fundamental issues — automated and scalable knowledge acquisition, predictive intelligence, explainable AI, trustworthy AI and ethical AI — that academia is particularly well suited to address.

As an example, Ramakrishnan cites the example of a driverless car, as use of the technology has become more prominent and more controversial in recent months.

“I’m in a driverless car,” Ramakrishnan said, “and I see two bad outcomes in front of me: do I hit the deer and kill it, or do I hit the wall and avoid it, and crash the car? How will an automated system resolve this?”

The answer to that question touches on three of the five foundational research challenges the Institute will prioritize: explainable AI (understanding how a driverless car determines which accident to avoid), trustworthy AI (knowing that the car will consistently follow that process, and cannot be hacked as a means of cyber attack) and ethical AI (determining whether the decision the car makes is, in fact, the correct one).

That last question may be new in the context of a driverless car, but it has been part of the academic tradition for centuries.

“I don’t think that the ethics of AI are that much different from the ethics of humanity,” Shek said. The rules that human beings operate by are often very fuzzy.”

And, in the study of AI, Bravman sees doors opening to a greater understanding of even bigger questions.

“People say that understanding how consciousness works, which is one or two steps beyond AI, is the biggest unsolved challenge that we know of in any science,” Bravman said. “I think that’s not hyperbole, so it’s a tremendously rich field.”

With alumni like Bravman and Shek adding their experience to that of Stony Brook’s faculty, it’s also a field where Stony Brook is poised to make powerful contributions.

Contributions to the seed research fund for the Institute for AI-Driven Discovery and Innovation are part of the Campaign for Stony Brook, a $600 million fundraising effort and the largest in SUNY history. To date, more than 47,546 people have donated nearly $590.3 million. Make a gift today in support of your interests and help Stony Brook effect powerful change on Long Island and around the world. What are you passionate about? Give today.