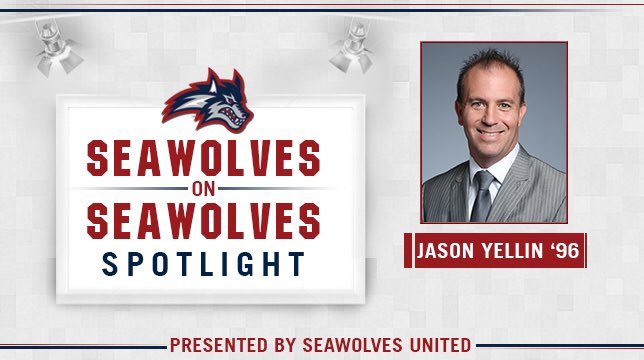 Alumnus Chris Blumenstetter ‘05 wrote the latest in the series, which shares the story of Jason Yellin ’96, whose career trajectory began in 1988 when he was a middle schooler watching his first Division III football contest between the Stony Brook Patriots and the Hofstra Flying Dutchmen.

“An avid sports fan, Jason arrived to the game about two hours early, taking his place on a completely uninhabited set of splintering wooden bleachers… ‘Hey kid, you wanna make 10 bucks?’ Greg Cannella, the assistant men’s lacrosse coach, asked looking for someone to work the sideline first down marker and chains. He easily could have said no and never thought twice about the decision. However, his acceptance of this offer would define the rest of his life.”

Yellin held many roles within Stony Brook Athletics while he was a college student there — including being the first person to don the original Wolfie suit — and he continued to pursue his passion for sports communications in the decades that followed. He is now Assistant Commissioner for Communications of the Big Ten Conference.

Read A Face in the Crowd: When Passion Becomes Profession, the full profile on Yellin, here.