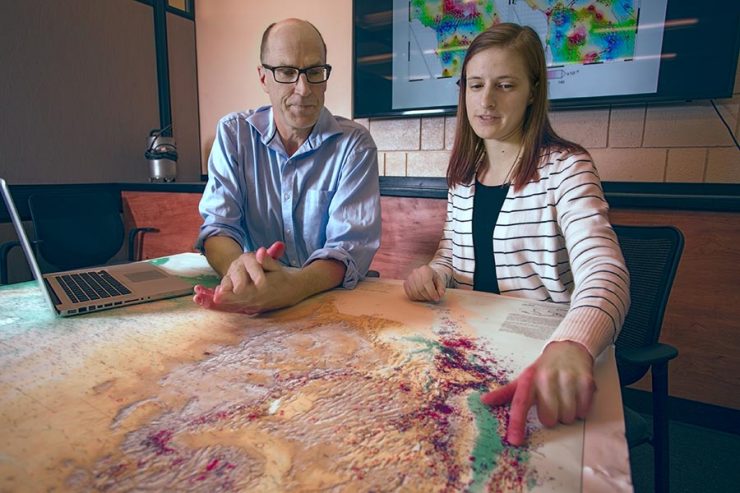 Learn all you can because you never know when it might come in handy. Not an earth-shaking concept, but it worked for Meredith Kraner ’14, who landed a life-changing (and literally earth-shaking) assignment in Professor William Holt’s Geophysics research lab at Stony Brook University. A little old-fashioned persistence didn’t hurt either.

“Bill’s graduate student at the time got me involved with his strain modeling and plotting codes,” said Kraner. “They are tricky to understand but were fundamental to Bill’s research.”

“At the end of August 2014, the South Napa Earthquake occurred and he needed someone with some experience with these codes to analyze and interpret the GPS data. I took the lead on the project in the last year of my undergraduate education.”

Kraner, Holt and Adrian Borsa, an assistant professor from Scripps Institution of Oceanography at UC San Diego, collaborated on the study, and their research was published earlier this year in the Journal of Geophysical Research, Solid Earth. News organizations, including American Geophysical Union, CBS, KCBS Radio, Live Science, covered the story.

All this was enabled by a skillset cultivated as an undergraduate research assistant at Stony Brook University. But Kraner also was placed into a role where she received a valuable lesson in how to deal with the national media.

“Adrian and I decided that it would be a good experience for Meredith to deal with the press coverage,” said Holt. “The research team prepared answers for specific questions, and Meredith was diligent with her preparation to ready herself for speaking to the press.”

Holt recalls a panicked phone call he received from Meredith while he was at a geophysics meeting in Canada.

“She said ‘They titled the article ‘Earthquake Weather’ and it is now published online. What should we do?” said Holt. “’This could cause widespread panic, misunderstanding, and possibly send the wrong message to the general public. How do we correct this?’ We advised her to email the journalist and explain that the research did not have implications for ‘earthquake weather’, but instead showed a seasonal change in crustal strain and stress (variations that occurred over several months).”

To the journalist’s credit, the article was quickly corrected, a testament to Kraner’s effective interaction with the press.

So why did her research get so much attention? Kraner believes it’s because it involved a large M6.0 earthquake in a highly tectonically active region.

The central finding of the article was that the South Napa Earthquake occurred at the time and location of an observed 3 mm horizontal expansion in the Earth’s crust. This expansion adds stress to the West Napa Faulting System and acts in addition to long-term stress accumulation from standard plate tectonic forces.

“The original focus of the research project was to characterize the stress state of the West Napa Faulting System before, during and after the South Napa Earthquake from the high-precision GPS dataset,” Kraner said. “After we uncovered a unique preseismic signature in the GPS data set that peaked in the late summer months for all eight years of GPS data that we analyzed, we decided to focus our efforts on trying to understand it. The signature ended up being a seasonal phenomenon associated in part with the seasonal groundwater discharge and recharge patterns of a local aquifer system — the Napa-Sonoma Valley Basin. We’re working to decipher whether this is due to groundwater pumping or the natural flow patterns of the aquifer or both.”

The work with Holt mostly focused on analyzing high-precision GPS data from Earthscope’s Plate Boundary Observatory, which is a network of roughly 1,300 stations operated by the science non-profit UNAVCO and funded by the National Science Foundation. “The data are unlike your average cell phone GPS, which have an accuracy of several feet or meters. Instead, this precise GPS dataset can achieve accuracy levels of 1 millimeter in position,” said Kraner.

Holt agreed that the research is a potential game-changer for the earthquake research community.

“The study shows that precise monitoring of crustal strains (inferred from accurate GPS and other space-based geodetic techniques) can improve our ability to forecast earthquake probabilities,” he said. “The research demonstrates that seasonal water loading variations can lead to stress changes in the crust that may impact when and where earthquakes occur within active plate boundary zone settings, such as California. This provides an exciting new field of research that constitutes an interface between solid Earth Science, hydrogeology, atmospheric and environmental science.”

Kraner had previously worked in two other research labs before working with Holt, first in planetary spectroscopy/remote sensing with Dr. Timothy Glotch, associate professor in the Department of Geosciences in the College of Arts and Sciences at Stony Brook, and then in structural geology with Dr. Daniel Davis, professor in the Department of Geosciences, co-authoring two papers with Glotch’s graduate students.

“I had asked Bill to work in his lab for roughly a year before I actually started working for him,” said Kraner. “It took some persuasion from both me and professors from other labs I worked in, but when I started working there Bill understood that I was a serious scientist and possessed a skill set that aligned with his lab’s needs and interests.”

Since she eventually led the effort on the South Napa Earthquake project she asked Holt if she could be first author in a collaborative effort.

Becoming a first author encouraged Kraner to enroll in the graduate geophysics program at the University of Nevada, Reno. There, she further explored the relationship between aquifer and faulting systems for Central California, for which she was awarded a prestigious NASA Earth and Space Science Fellowship. This award funded the completion of her MS Thesis and required writing a formal research proposal, a skill cultivated while working as an undergraduate researcher at Stony Brook.

What kinds of advice does Kraner have for aspiring undergraduate students looking to find a research lab that reflects their skills and interests?

“Get involved as soon as possible,” she urged. “And initiate the conversation to work with a specific professor. Don’t be afraid to send emails to research labs of interest to you or visit professors you want to work with during their office hours and meet them in person. Even if the answer is ‘no’ initially, they will keep you in mind for the future as you progress in your degree program.”

Why is collaboration so vital to universities such as Stony Brook?