Alum Writes About Her Life in Alaska 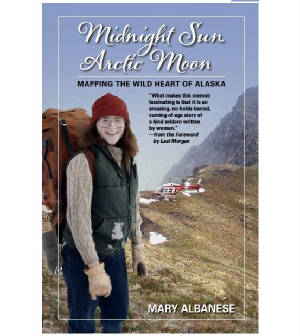 Stony Brook alumna Mary Albanese (BA, ’77) went to Alaska to become a school teacher after graduation and ended up becoming an arctic geological explorer instead, mapping areas of Alaska that were uncharted at the time. Her new book, Midnight Sun, Arctic Moon: Mapping the Wild Heart of Alaska, tells the story of her adventure. Epicenter Press will release the book on May 15, 2012.

“It was during my Stony Brook undergraduate years (science teaching) that I came up with my plan to go north to Alaska,” said Albanese. She was inexplicably drawn to Alaska. After applying for teaching positions and not receiving any job offers, she bought a one-way ticket to Fairbanks anyway and found herself becoming a geological explorer.

Midnight Sun, Arctic Moon is the story of a life lived in extremes set against the beauty and harshness of Alaska. More than a memoir, it takes place during an important period in Alaska’s history, as the young state was still discovering itself.

A former geologist for the state of Alaska, Albanese is an author, artist and screenwriter. She has won numerous awards for her writing in a wide range of genres and has had one of her short films screened at Cannes Film Festival. A native of New York, Albanese resides in England with her husband Tom Albanese, who she met in Alaska.

For more information about her and to view the Midnight Sun, Arctic Moon book trailer, visit www.midnightsunarcticmoon.com.