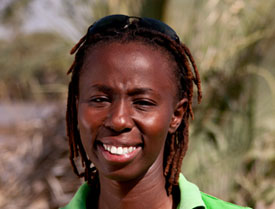 Ikal Angelei, who earned her master’s in public policy and political science at Stony Brook, is one of six winners of the Goldman Environmental Prize for her campaign to block construction of the Gibe 3 Dam on the Omo River in Ethiopia. If completed, the dam would be the largest hydroelectric plant in Africa and provide increased electrical power to Kenya and Ethiopia. But it would also greatly reduce water levels in Lake Turkana, making survival even more difficult for struggling local communities that depend on the lake for fishing and other resources.

Angelei grew up in Kenya on the shores of Lake Turkana, the largest desert lake and a World Heritage Site where some of the oldest human fossils have been found. After attending the University of Nairobi and then Stony Brook, she returned home and began working for the Turkana Basin Institute. That is when she learned about the proposed dam from Institute Chair  Richard Leakey, who convinced her to take on this mission. Her story is featured in an April 16 New York Times article.

Slowly her campaign gained momentum, and in 2009 she founded Friends of Lake Turkana. The group was able to halt construction of the dam after it demanded that financers withdraw their funding from the project.

As a result of her efforts, Angelei won the Goldman Prize in the African regional category. The prize is also awarded to a recipient in Asia, Europe, an island nation, North America and South or Central America. Each honoree receives an award of $150,000. The program was initiated in 1990 by Richard and Rhoda Goldman, civic leaders and philanthropists in San Francisco.