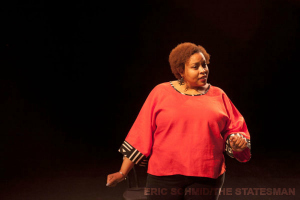 Turenne’s play is about her personal journey of self-identity and the way her natural hair has played a crucial role throughout her life. Though her play highlights her own experiences, it also represents the impact of hair on the individual journeys of many African American women.

“To hear it come from someone else’s mouth and to hear her struggles and what she went through, it’s like wow … you know, I can relate to that,” Ashley Wallace, sophomore marine biology major, said. “That kind of inspired me to take on certain things.”

Turenne portrayed a total of 21 characters including family members, elementary school classmates, hair stylists and prominent black female figures — each of whom played a special role in her personal journey. While she changed voices, imitated childhood memories and pranced around the stage, the audience watched her various transitions while occasionally filling the room with laughter.

Whether she straightened her hair to fit in with the other girls at school, grew dreadlocks or cut all her hair off, Turenne described these transitions as key phases of her journey. It not only helped her embrace her natural hair but got her to realize that, as she said in her performance, “Hair is just hair, it will grow back,” so it should not be the defining factor of her identity.

“You define who you are. Don’t care what other people think. You have beauty no matter what, and that stories are important,” Turenne said when asked what she hoped would resonate with her audience.

The performance was part of a project called “The Works,” which is a series of events held during Black History Month that celebrates theater, culture and art created by black artists.

Jingshu Han, a junior physics and mathematics major and a transfer student from China, said he really enjoyed the show.

“Because I’m not from America, I’m really shocked that she had to go through that because that’s not a part of my culture,” Han said. “I learned a lot about the relation between white and black people and old and new generations in the black society.”

Turenne is an artist, activist and educator. She is the assistant dean for community engagement at Occidental College located in Los Angeles, California. Her writing has been published in several anthologies including “Check the Rhyme: An Anthology of Female Poets and Emcees,” which was nominated for a 2007 NAACP Image Award.

Her film work has been a part of film festivals such as the Hollywood Black Film Festival and the Montréal International Haitian Film Festival, where her short film “Woodshed” was nominated for Best Short Film. Turenne has also worked in various theatrical performances such as “Come Back to Me,” which was featured in New York’s Fruit Play Festival.

“The Works” project was put together by a small group of African American theatre arts students who hope to see events like this become a norm at Stony Brook University.

“This opens the door for more art work of other cultures to be shown here,” Kristen Spencer, junior theatre arts major and event coordinator, said.

Turenne will be performing “Love, Locs and Liberation” next in Los Angeles, but says her ultimate goal is to get her performance on Broadway.