Alum Joseph Moreno Shines Under the Bright Lights of CNN 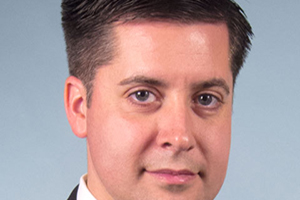 Joseph Moreno ‘96 is ready for his closeup.

An honoree at Stony Brook’s inaugural 40 Under Forty celebration in 2014, Moreno has been highly visible on CNN in recent weeks, providing legal analysis for the network’s coverage of investigations and court cases surrounding President Donald J. Trump and his 2016 campaign. Moreno’s analysis of the legal issues at play has provided a key complement to the political analysis from CNN’s array of political pros, helping viewers get a more complete understanding of the news from Washington.

When he’s not under the TV lights, Moreno puts his legal mind to work as a white-collar defense and investigations partner at Cadwalader, Wickersham and Taft LLP and a Lieutenant Colonel in the U.S. Army Reserve. Earlier in his career, Moreno served as a prosecutor for the U.S. Department of Justice and a staff member of the FBI’s 9/11 Review Commission.

Moreno is also highly active in Stony Brook’s alumni community, serving on the Board of the Alumni Association. This past spring, he hosted a reception with alumni in the D.C. area for Stony Brook University President Samuel L. Stanley Jr., MD.

How did your appearances on CNN come about?
It really fell into my lap. I hadn’t done TV before March of this year. I didn’t want to be seen as partisan, so I just kind of avoided it. Then, CNN reached out, and I spoke with the producer. They said they found my bio on LinkedIn, and on the firm’s web page — it’s a good lesson to have a strong online presence if you’re a professional — and they asked me if I could come in and do an interview. I did it, here in DC, I was live with Brianna Keilar — and they’ve called me back about a dozen times since then. It’s a fun little side endeavor. The firm likes it – it’s good exposure — and it doesn’t take a ton of time. I usually get a few hours notice, and if I can do it, I do it.

What would surprise someone who hasn’t done TV about the process?
It may look like it’s almost scripted and put together but in fact, it’s very fluid. They do a very nice job of presenting, which I didn’t really appreciate until I started doing it. It was surprising how fluid it is. The news cycle is so intense — so much going on — so they are really scrambling all the time to get us the latest. That means behind the scenes, they’re scheduling people, adjusting based on breaking news. They may think that they’re going into a certain story in the morning, and then something happens, either on that story or on something totally unrelated that just sort of takes over the news. There could be some kind of disaster or catastrophe, or a good story, or something. They have to be flexible, and they ask me as a guest to be flexible.

I give CNN a lot of credit. Before the last few months, I didn’t watch a lot of CNN. I knew Wolf Blitzer, and some of the bigger names, but I didn’t know who a lot of these other folks were. Now, having been thrown into it, and having been on four different shows with a dozen different guests, that’s a lot of fun.

What have the “Wow” moments been for you in making your TV appearances?
Being on CNN with Carl Bernstein was pretty cool. I was sitting in DC, and he was in New York, so I was on the air with him, but it would have been awesome if I were sitting next to him; that would have been really cool. It was cool enough that it went from him to me, and I got to mention his name and build on one of his answers.

How big a jump is your CNN work from the cases that you work on when you’re at your firm, or the issues?
It’s not a huge jump, believe it or not. I don’t have any Russian clients, and I don’t have anyone being investigated by Mueller, but I do work with high-stakes Washington investigations. I’ve represented people before Congress, the Department of Justice, the Securities and Exchange Commission. I’ve prosecuted people as a federal prosecutor. Dealing with classified information, dealing with national security, prosecutions, investigations and the FBI is something I’ve been doing for a long time. It’s not a huge jump, and it’s actually been pretty fun to use those skills in public commentary, even if it’s just a few minutes once or twice a week. It’s fun to be part of the dialogue. I wish I had time to do more.

What was your journey to practicing that kind of law? IS it something you always had a sense you wanted to do?
Not at all. I thought I was going to be a corporate lawyer. I had a JD/MBA — I’m a CPA — and I thought I would practice corporate law. I did it for five years, and I never loved it. I was at a great firm, Skadden Arps, and they were very good to me, but I never loved being a corporate lawyer. I never thought it played to my strengths. I was good at it, but not great at it. Then, what happened was, after law school, I joined the Army Reserves in 2001, and then after September 11, not surprisingly, I was deployed, first to Germany, then to Iraq, and then to Africa after that. When I was going to Germany, I went to the processing center at Fort Benning in Georgia, and they said, “We need a prosecutor,” and I said, “I’m corporate lawyer, and I’ve never prosecuted a case before, but if you’ re let me take a chance, I’ll give it a go.” So, they sent me to Baumholder, which is a big installation on the western side of Germany,  and I was a prosecutor for nine months, and I loved it. At first, I tried little cases, like AWOLs and desertions and drug cases, and then I had a stabbing case and a fraud case and a homicide, and I really liked it. Then, I went to Iraq for a year, and I was a prosecutor there, and Ioved it. So, when I came back to Skadden Arps, after being gone for about a year and a half on active duty, I said I wanted to transfer to our white-collar litigation department. That’s what they did. So I spent another year at Skadden, and then I came here to Cadawalder, and I’ve been doing white-collar litigation ever since. So, it was really my army time as a prosecutor that sent me in this direction of being a criminal lawyer.

Then, I went to the Justice Department. Based on my military background, I got a job at Main Justice, here in Washington, doing national security prosecutions in the counterterrorism section. They liked the fact that I had a military background, that I’d been deployed, had a security clearance, so it was a good fit. Now, I’m back at the firm, and I stayed in DC. I do all kinds of white-collar stuff, but I really like the national security cases. Those are really fun. I always tell law students and young lawyers, “Be flexible and don’t be afraid, even after you graduate, to move your career in the direction that you want it to go. Just because you start out in something doesn’t mean that you have to do that for the next 30 years.

And through everything, you’ve stayed very involved with Stony Brook. What’s your biggest motivation for maintaining that connection and being as involved as you are?
I owe a lot to the school. I really feel like Stony Brook gave me a fantastic foundation: a great value, a great quality of education, with great professors, and really a great launching point to law school. Also, the alumni are great. There’s a fantastic network out there. Stony Brook alums are really good about getting together and about supporting each other, whether it’s looking for jobs, looking for opportunities, or just looking to socialize. It’s a really nice group of folks. I feel like I’ve really benefited from the school, both as a student and then subsequently, so I love to give back; however I can, whether it’s through being on the Alumni Association Board or helping alums, being a mentor, or hosting something when I can.

What are some of your favorite memories from your time here?
There was a program when I was in high school where you could take a course at Stony Brook and get credit for it, and it was super-cheap; you could do it for the cost of fees. So, I did Psych 101, and it was in this big lecture hall, and I was not used to big lecture halls. Also, it was 6:30 or 7 at night, so I would do my full day of high school, then maybe soccer practice, and then come to Stony Brook. One night, I fell asleep, just dozed off in my chair for no more than a few minutes or something. When I woke up, the girl next to me, whom I did not know, had taken double notes for that few minutes that I was asleep and wrote in my notebook the notes that I had missed when the professor was lecturing. She barely knew me, and I thought that was a pretty cool little story about how people at Stony Brook are pretty cool, not super-competitive with one another, and are willing to help each other out.

One professor really stands out as well: Lester Paldy in the Political Science department. We’ve stayed in touch for over 20 years now since I graduated, and he also helped me. He was a Marine, was in government for many years, and also really helped cultivate my interest in national security. He’s a great guy.

You were part of the first 40 Under Forty class at Stony Brook. How encouraging is it to see that program continue to grow into an institution here and strengthen connections in this alumni community in different ways.
It’s a great way to get alumni back in the fold. People are flattered. It’s a great way to get alumni who may not think about the school to think about it again, giving them an incentive to get involved, and I think it’s inspiring for the students, too. At 18, 19, 20 years old, you’re at school, you don’t necessarily know what your major’s going to be, you don’t know what job you’re going to have eventually, and I think it’s pretty cool to see someone who’s 10, 15, 20 years out, and see what they’re doing, and the different paths people take. I think it can be really inspiring to students, whether they can go to the event, or read about it, or see someone’s bio. I think it can be really helpful to students figuring out what they’re going to do: go into the workforce, go to grad school, or whatever else.