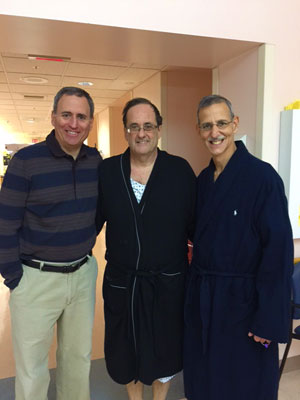 Robert Roth was on his back, staring up at fluorescent lights. His kidney transplant surgery was just moments away.

The HBO executive’s thoughts volleyed between his mom, who died three decades earlier from complications related to a kidney transplant, and his best friend, Stuart, who at the moment was across the hall having his left kidney harvested.

“It was almost one of those out-of-body experiences,” Roth, 58, said, “where you know what’s happening is real, but you can’t come to grips with the fact that momentarily, you will be cut open and your best friend’s organ will be placed inside of you.”

Roth met Stuart Zeitlin – the man who saved his life in December – during their first week as freshmen at Stony Brook University, back in 1973 when construction of the hospital and the Health Sciences Center was kicking off on the other side of Nicolls Road.

Zeitlin, then of Manhasset Hills, quickly struck up a friendship with Roth during his visits to see a high school pal a few doors down from Roth’s room in Irving College. Together with another freshman in the same residence hall – Kenny Cohen from Coney Island – Zeitlin and Roth formed a trio that remains intact today.

The three spent that fall sharing common interests, while pushing each other down the hall in shopping carts and rooting their hearts out for the New York Mets in the World Series. They then spent their lives cultivating their bond – graduating together from Stony Brook in 1977, serving as groomsmen in each other’s wedding parties, celebrating the births of each of their children, and making sure to routinely meet at Ben’s Kosher Deli in Greenvale for lunch or dinner.

“We had similar interests and similar backgrounds,” recalled Cohen, 59, who went on to medical school and is now a cardiologist in Lake Success. “We were part of the Stony Brook experience – when much of the campus was still being constructed and we had to walk through the mud and around piles of dirt to get to class. And we loved it.”

Cohen is credited with paving the way for Zeitlin, 59, to donate a kidney to Roth on December 18 at Yale-New Haven Hospital.

“Stu could hardly stand having blood drawn. The sight of blood had always made him queasy,” said Roth, who returned to work as Executive Vice President and CFO at HBO eight weeks after the operation.

“Stu was initially reluctant. Kenny was instrumental in getting Stu to realize that if there was any chance of finding a donor, he might be my best shot,” continued Roth, who personally and through HBO has generously supported Stony Brook and the Stony Brook Film Festival.

Roth, who lives in Weston, Connecticut with his wife Linda, would not consider accepting a kidney donation from either of his two adult children. He said the risk would be too high for them, considering his type of kidney disease was hereditary.

Cohen believed it was important to get the message across to Zeitlin – who like Roth has Type O blood – that donating a kidney is a low-risk procedure.

“You have to be by definition extremely healthy to donate a kidney,” said the heart doctor, who lives in Glen Head with his wife Hilari. “It’s absolutely proven that your lifespan is not affected at all. There are even some reports that say patients live longer because the donor feels so altruistic that it actually improves their health.”

Roth said it wasn’t long before Zeitlin, who has three adult children with his wife Judy and five grandchildren under 4, became “gung-ho” in his zeal to move ahead with the surgery.

On the day of the surgery, Roth and Zeitlin declined a ride to the hospital and instead made the short walk from their hotel.

“Rob and I laughed that it reminded us of the walks to the lecture center at Stony Brook or to the Light Engineering Building, where we took our calculus exams in 1973,” said Zeitlin, a sales manager with Big City/Danken Auto Parts in Brooklyn. “This time, however, the stakes were different and larger.”

Shortly after they were admitted at the hospital, Roth and Zeitlin were separated.

“We never had a chance to say goodbye or good luck,” said Zeitlin, whose operation began about 40 minutes before Roth’s.

In the moments before Zeitlin was wheeled into surgery, the North Bellmore grandfather said he felt relief that the operation was at hand because the “countdown to surgery” had become exhausting. But he was also very scared.

“I had never had surgery before – the nurse informed me that a bris, or circumcision, didn’t count,” quipped Zeitlin, the jokester of the three Stony Brook alums, before turning serious. “I was experiencing fear – fear of not waking up and fear of my kidney not taking in Rob.”

Four hours after the pensive pre-surgery moments for Zeitlin and Roth, they were both in recovery. Roth’s body was immediately adjusting to his friend’s kidney. The surgery was a success.

“I have a new lease on life because I had been living with a dark cloud over my head, knowing this was a degenerative condition and that I had very limited options,” said Roth. “Having Stu agree to do this was really like having a knight in shining armor. It is something I am eternally grateful for.”

“Stu was a guy afraid to give blood. Imagine the bravery it took to donate his kidney,” Cohen said. “Rob is blessed to have him as a friend. I’m blessed to have them both as friends.”

The three Stony Brook alums hope their kidney transplant story will inspire others to volunteer to be living organ donors.

“There is a tremendous shortage of kidneys. If we can get people to donate … you’re talking about thousands and thousands of lives to be saved,” Cohen said. “People who receive live kidneys do much better than those who receive one from a cadaver. We want to make people understand that it really can be done; that it is not as scary as it seems.”