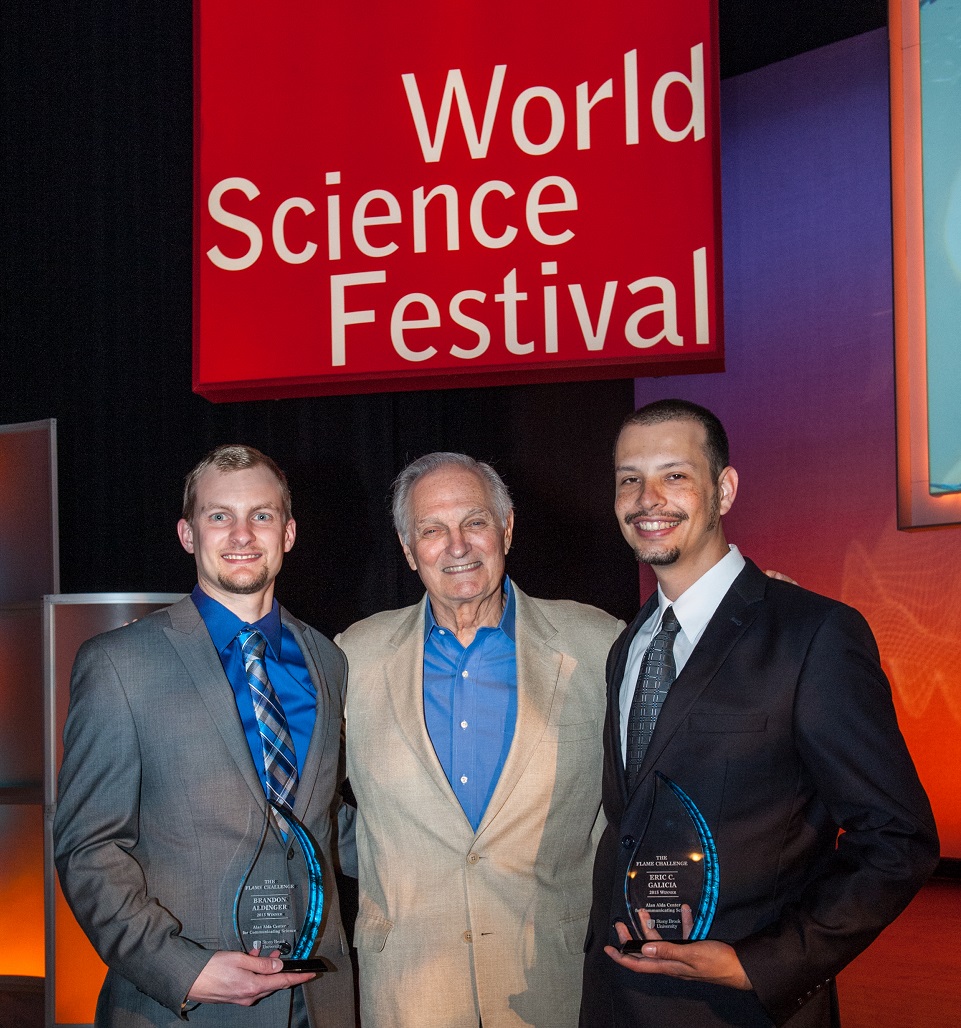 It’s like a superpower, a TV with static, a brain-cleaning system, a study hall, a practice session for video games. Those were just some of the metaphors used to explain sleep by the winners of Stony Brook University’s Flame Challenge contest, announced today by Alan Alda.

The winners, Brandon Aldinger of Renfrew PA and Eric C. Galicia of Des Plaines IL, each received a $1,000 prize, as well as congratulations from Alda and hundreds of children at the “What Is Sleep?” event today at the World Science Festival in Manhattan. The Flame Challenge asked scientists to answer the question “what is sleep?” in a way that would interest and enlighten 11-year-olds. More than 20,000 schoolchildren judged the entries, including children in Australia, Canada, China, Pakistan, Germany, India, Kuwait, New Zealand, Pakistan, Singapore, South Korea, Thailand, and the United Kingdom, as well as in the United States.

Aldinger, a materials scientist with a PhD in physical chemistry from Cornell University, won for the top-ranked written answer. Galicia, a candidate for a master’s degree in health physics at the Illinois Institute of Technology, won for the top-ranked video explanation. The winning entries, as well as other finalists, can be seen at the Flame Challenge website, www.flamechallenge.org. The annual contest is run by Stony Brook University’s Alan Alda Center for Communicating Science, named for Alda, an acclaimed actor, writer and science advocate who is also a visiting professor at Stony Brook.

For Aldinger, the contest was a chance to inspire kids. “The Flame Challenge was an exciting opportunity to teach children around the world about the mysterious topic of sleep,” he said. “Science is an incredibly rewarding profession and pastime. It is critical to expose kids to science in a way that they can understand, especially as they dream about careers that will guide their later schooling.” Aldinger works at Ibis Tek, a veteran-owned small business, where he designs transparent armor, the multi-layered glass composites that protect soldiers in their vehicles.

In his written entry, he explained that during sleep our brain organizes what we learned while we were awake. He added: “So, the next time your mom or dad yells, ‘Wake up! It’s time to go to school!’ you can explain to them that you were actually still studying from yesterday!”

Galicia, the video winner, fell in love with science fiction films and books in grade school, sparking a passion for science and film-making. “I’ve always been a big advocate of being able to explain advanced topics in physics to anybody, especially children,” he said. “One of my chemistry teachers once said, ‘If you can’t explain it to a five-year-old, then you don’t know what you’re talking about.’ I believe this to be true.”

Besides studying for his master’s degree in health physics, Galicia he runs a Wing Tsun martial arts school, and continues to pursue his film-making passions. His humorous video features a character named Brian, who stayed up late playing video games and is feeling the lack of sleep.

The Flame Challenge, now in its fourth year, aims to encourage scientists to explain complex material in ways non-scientists can understand. The first year’s question, “What is a flame?” was one that Alan Alda had asked when he was 11. The contest is sponsored by the American Chemical Society and the American Association for the Advancement of Science (AAAS).

“Alan Alda lit the flame, but year in and year out it is the children who are the driving force behind this remarkable challenge. Their questions, their curiosity, and their rigor really put scientists to the test. That’s particularly true with this year’s challenge, what is sleep?” said Diane Grob Schmidt, president of the American Chemical Society. “This is a complex question that continues to trigger spirited discussion among scientists. So to be able to explain sleep in a way that is simple, yet detailed enough to satisfy the children judging this year’s contest is not just a challenge, it is extraordinary achievement. I congratulate this year’s winners and I’m proud that the American Chemical Society is and will continue to be a sponsor of the Flame Challenge.”

To find the Flame Challenge winners, entries from more than 200 scientists were first screened for accuracy and then sent out to schools for judging by 11-year-olds. Entries came in from scientists from countries including Brazil, Greece, India, Israel, Italy, Liberia, Sweden, Syria, Turkey, and the UK, as well as the United States.

Alan Alda launched the Flame Challenge in 2012 by asking scientists to explain a flame to an 11-year old in clear and concise terms. Since then, the questions – what is time, what is color, and what is sleep – have been contributed by 11-year-olds. The sleep question was sent in by a sixth-grade class in Garden City Middle School on Long Island, N.Y.

This year’s other finalists in the written category were Pranathi Kondapaneni, a physician from Arlington, VA, and Preeti Zanwar, who teaches scientific writing to graduate students at the University of Houston Clear Lake. In the video category, the other finalists were Rohan Kapitany of Queensland, Australia, a PhD candidate studying experimental psychology, and Matteo Farinella of London, UK, who has a PhD in neuroscience and works in the field of science communication. He teamed up with designer Pamela Parker and sound artist Andrew Jones to produce his first animation.

The Flame Challenge will run again next year with a new question contributed by 11-year-olds. Children can submit their questions for consideration as next year’s topic on their website, flamechallenge.org.