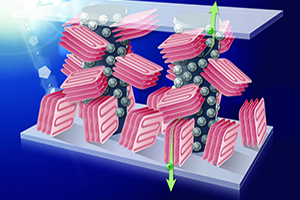 Polymer plastic solar cells remain an industry priority because of their light weight, flexibility and cost-effectiveness. Now scientists from Stony Brook University and the U.S. Department of Energy’s (DOE) Brookhaven National Laboratory (BNL) have demonstrated that these types of solar cells can be more efficient and have more stability based on new research findings.

Led by Miriam Rafailovich, PhD, a Distinguished Professor at Stony Brook University, and Chang-Yong Nam, PhD, a scientist at BNL and Adjunct Professor at Stony Brook, the research team discovered that by adding a common inert polymer, called polystyrene, these solar cells undergo an optimized internal morphology, resulting in a higher device performance.

The discovery solves a problem with polymer plastic solar cells. Most of these cells require an additive included for high device performance – a non-active small chain molecule to control internal morphology. But the additive is known to cause stability problems under light and heat, thus compromising performance and efficiency.

The new study, published in Advanced Materials Interfaces, demonstrates that replacing the additive with the inert polymer potentially solves this problem. In a previously published paper in Nanoscale, the researchers used a similar approach, but, with a different polymer.

This earlier work illustrated that a newly engineered polymer plastic solar cell increases optimal thickness – a quality that is better suited for industrial production by low-cost coating methods. The significance of this result was featured on the U.S. Department of Energy (DOE) website.

The ongoing investigation of these polymer plastic solar cells is taking place at Stony Brook’s Advanced Energy Research and Technology Center and BNL’s Center for Functional Nanomaterials, a DOE Office of Science User Facility. The work is supported by grants from the National Science Foundation and the DOE.