About the Matthew T. Crosson Scholarship

Throughout his career as a business leader, attorney and television commentator, Matt Crosson was a passionate defender of the truth. As a New York City assistant district attorney, he was deputy chief of the Frauds Bureau where, in addition to investigating and prosecuting complex cases of bank fraud, securities fraud, embezzlement and international arms trafficking, he created what is now the national White Collar Crime Center. 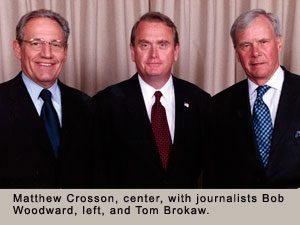 As chief administrator for management support of the New York State Unified Court System, he conceived and authored the Court Facilities Act, which led to the largest justice-related construction program in the nation outside the federal government. And as president and chief executive officer of the Long Island Association, Long Island’s principal business and civic organization, he was an effective and visionary advocate for the growth and development of approximately 5,000 companies and organizations.

Crosson was a tireless proponent for the public good. As host of several Long Island public affairs television programs, including the award-winning “Cutting Edge” and “TV 55 Focus,” he exemplified the special junction at which journalists and dedicated public servants have a common purpose: to bring the truth about important issues to light in an effort to solve problems and improve lives.

To honor and commemorate the values and ideals that characterized Crosson’s life and work, The Matthew T. Crosson Memorial Scholarship in Journalism was created by his wife, Elaine Crosson, vice president for external affairs at Stony Brook University, and his son, Daniel. The scholarship will help support students in the Stony Brook University School of Journalism, ranked as one of the top 50 journalism schools in the nation and recently cited as a “program on the rise.” The faculty includes some of the nation’s foremost journalists, including James Klurfeld, Crosson’s close friend and longtime “Cutting Edge” co-host and the former vice president and editor of the editorial pages at Newsday.

The purpose of the scholarship is to enable young journalists to carry on the pursuit of truth in public discourse that Crosson treasured so dearly. The Matthew T. Crosson Scholarship Fund will provide an annual scholarship to a deserving junior or senior with a demonstrable interest in public affairs news and analysis. The recipient will have the opportunity to experience first hand the juxtaposition of journalism and public policy through internships at Newsday, Newsday.com and News 12.

The scholarship was launched with an initial contribution of $50,000 from Elaine and Daniel Crosson, a portion which comes from donations from family and friends. The inaugural contribution will be matched by a special grant to Stony Brook University by Jim and Marilyn Simons, making the total impact of the gift $100,000.