A Spotlight on Donor Bobbie Wien 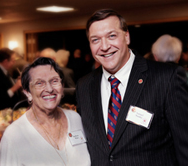 The official slogan of the Friends of Staller Center donor program, is “The Friends Make it Happen,” but it could as easily be, “Bobbie Wien Made it Happen.”

Back in 1980, Bobbie attended one of the Center’s first events and immediately recognized that the all-new performing arts venue would require substantial private support to realize its potential. So Bobbie, being Bobbie, wrote to the Center’s director and volunteered to start a “Friends” program.
Bobbie’s first “Friends” direct mail appeal yielded $18,000 and since then its fundraising efforts – including an annual benefit gala (this year’s gala is March 6) – has raised over $7 million. Her success with the program and dedication to the Center were rewarded with a full time job, which eventually evolved into her current position as the Center’s Financial Director.
In those early days she did it all – create the direct mail list of potential “Friends” from records of ticket holders and community members, work with graphic designers, coordinate the printing, write the letters, acknowledge gifts – “all without a computer,” she’s proud to say.
Bobbie’s infectious energy and indomitable spirit inspired others to join her and she can now depend on her Friends of Staller Center Council, comprised of community members and loyal Staller patrons, to help with the heavy lifting of organizing fundraising events and donor cultivation.
Bobbie’s “Friends” – now over 700 strong – help subsidize actual ticket costs to keep the prices as low as possible, support programming, and help fund the Center’s marketing and advertising.
In exchange for their support, “Friends” at every level of giving (starting at $50) are listed in the season playbill with “Pacesetters,” those giving $2500 or more, enjoying special meet-the-artist parties, VIP film festival passes with reserved seating, and a pair of complimentary tickets to any five Staller Center performances.
Another critical initiative of the “Friends,” which is near and dear to Bobbie’s heart, is outreach to Stony Brook students and area schools, with the aim of developing the audiences of tomorrow. During the Center’s 25th anniversary season, Bobbie’s children stepped forward to create the Barbara N. Wien Endowment.
Among other outreach activities, the Endowment underwrites a program that provides one free ticket for all new Stony Brook students to an event of their choice. The Endowment also helps fund talks and performances at area schools by Stony Brook music students and visiting performers.
“Thanks to Bobbie, her children and her extended family and friends, we can bring cultural programs directly to future generations who would not otherwise have the opportunity to enrich their lives with the magic of the arts,” said Outreach Coordinator Paul Newland.
As someone whose job it is to persuade people to offer financial support, Bobbie “walks the walk.” A few years ago, Bobbie helped underwrite the construction of a track in the Indoor Sports Complex in honor of her father, who was a track and field fan. And just recently she was recognized by President Stanley as Stony Brook’s longest running, year-after-year donor.
As the Center’s finance director she is more than a little familiar with the compounding impact of regular, consistent giving. “Every gift – no matter the size – adds up,” said Bobbie.
For more information on the Friends of Staller, click here or call 631-632-2787.