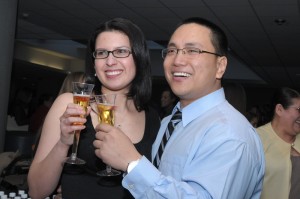 Fourth-year medical student Roger Luo made more than one match during Stony Brook Medicine’s Residency Match Day as he surprised girlfriend and classmate, Gaby Chancay, with a marriage proposal.

It was a Stony Brook Medicine Residency Match Day like no other when fourth-year medical student Roger Luo surprised his girlfriend and classmate, Gaby Chancay, with a marriage proposal. The story was captured live by CBS television and Stony Brook University.

Their actual residency matches were a hit, too. Chancay matched to the Icahn School of Medicine at Mount Sinai in internal medicine; Luo matched to New Jersey Medical School/Rutgers in physical medicine and rehabilitation.

Luo and Chancay were among the 127 fourth-year Stony Brook University School of Medicine students who matched on March 21 to residencies around the country, in New York and 17 other states. Slightly more than half (51 percent) will remain in New York State. Sixteen students will launch their medical careers at Stony Brook when their residency training begins in July. The group will enter residency programs such as surgery, emergency medicine and internal medicine.