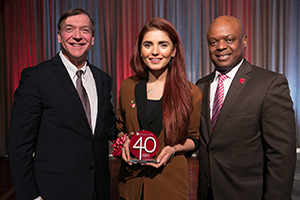 In January, Momina Mustehsan ’15 was honored as one of Stony Brook University’s 40 Under Forty.

Mustehsan, who earned her bachelor’s degree from Stony Brook with a dual major in biomedical engineering and applied mathematics and statistics, was honored by Forbes in late March as part of the magazine’s “30 Under 30 Asia” list.

Honoring Mustehsan in the “Entertainment and Sports” category, Forbes wrote, “Mustehsan used her newfound exposure to advocate for social causes important to her, including women’s rights, cyberbullying, and mental health awareness.”

A couple of weeks earlier, Mustehsan did some of her most widely seen advocacy yet in a video op-ed for NowThis News. Speaking on the topic of feminism and women’s empowerment, Mustehsan discussed the challenges of advocating for women around the world.

“Every region faces a different challenge when it comes to women empowerment,” Mustehsan said. “In South Asia, there is a lack of understanding of the term empowerment, because the majority of the people there think that the definition of empowerment is to wear fewer clothes, to renounce her culture and traditions, and that it’s synonymous with immorality.”

Mustehsan offered an alternative definition, saying, “Empowering women in Pakistan would mean raising them equal to boys, providing them with the same education, giving them the same job opportunities, equal wages and equal respect.”

Along the same lines, Mustehsan has looked to carve out her own identity, separate from how the world sometimes chooses to see her. While her greatest claim to fame may be her duet with Rahat Fateh Ali Khan on “Afreen Afreen” — their Coke Studio performance is the most watched Pakistani-origin video in YouTube history, with more than 144 million views — Mustehsan’s Twitter bio reads, “Engineer. Mathematician. Social Activist. Musician.”

Along those lines, while she serves as a brand ambassador for L’Oreal Paris cosmetics and has more than 1.5 million followers on Instagram, Mustehsan emphasizes keeping physical appearance in proper perspective.

“In my opinion,” Mustehsan said, “a woman’s body is not her only asset. As feminists, we have to become more tolerant of each other’s differences, because we are essentially working towards the same goal, which is to empower women. We need to work together with an open mind instead of shooting each other down at the slightest difference.” 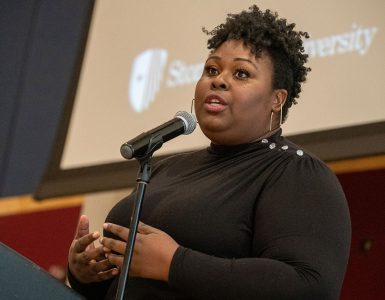