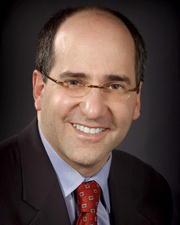 During the School of Medicine’s White Coat Ceremony on Sunday, August 23, 2015, David Bernstein, MD ’88 was recognized as the recipient of the 2015 School of Medicine Distinguished Alumni Award. Well respected by his fellow physicians and by his patients, Dr. Bernstein has developed a reputation as an outstanding clinician.

Dr. Bernstein’s main research interest has been in field of liver diseases, with most of his work concentrated on developing new treatments for chronic hepatitis C. Since 1994, he has been involved in designing programs for the treatment of hepatitis C and has been an influential national and international leader in this field. He is the author of over 100 publications, 10 book chapters, and has been the principal investigator in more than 100 clinical trials. His work has been published in prestigious journals such as the New England Journal of Medicine and The Lancet. He is regularly to lecture about this topic on Long Island, across the nation and around the globe. His research has led to the development of new medications which are able to cure more than 95% of patients with hepatitis C infection and in the future could lead to the eradication of hepatitis C infection in the United States. Hepatitis C affects an estimated 5 to 7 million Americans and is the leading indication for liver transplantation in the United States, and is the most common predisposing factor for the development of liver cancer in the United States. These new therapies should dramatically change these statistics for the better.

Dr. Bernstein has been involved in shaping public policy and education regarding liver diseases. He serves as a special consultant to the New York State Department of Health and in that role has helped develop and implement New York State’s 5-year Strategic Plan for Viral Hepatitis as well as led the group developing guidelines to be used for the treatment of hepatitis C in New York State. He regularly leads telemedicine conferences for public health providers, prison health providers and federally qualified health care centers to educate these providers and has made himself available as a special consultant to these center for individual cases’ questions. It is important to note that all this work is done on a volunteer basis.

Since 1999, he has written regular columns under the masthead “Liver Lines” in the Anton Community Newspapers on Long Island to better educate the public about all aspects of liver disease in the hopes of bringing a better understanding of these diseases and issues to the local population.

In an effort to improve provider education and educate local and state governments on the overall health care burden of liver diseases, Dr. Bernstein organized his colleagues across New York State and founded the Empire Liver Foundation in 2013. The Empire Liver Foundation, comprised of more than 90% of the practicing liver doctors in New York State, has quickly become the premier liver organization in the state and is looked to regularly by the New York City and State Department of Health to provide consultation on liver-related issues.

In addition to all the work listed above, Dr. Bernstein maintains a busy clinical practice in the field of hepatology. Over the years, he has helped improve the quality of life thousands of patients and their families in the area which he serves. He has been recognized by Castle-Connelly as one of the Best Doctors since 2006 and currently serves on the Board of Directors of Paion, Inc.

Investigators begin critical research to address urgent healthcare challenges, including prognostic and therapeutic studies, as well as the far-reaching social impacts of the pandemic.

In a new "Beyond the Expected" podcast, Interim President Michael Bernstein talks to Dr. Carolyn Peabody and student Meesha Johnson about ensuring all indigenous Long Islanders are counted.

This year’s campaign centers on discarded face masks, disposable gloves and other PPE that are ending up on sidewalks, parks and other outdoor spaces instead of in the trash.

Username or hashtag #stonybrooku is incorrect.