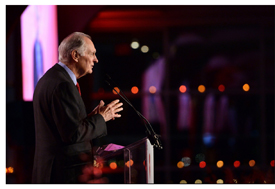 Stony Brook University’s Center for Communicating Science—the first of its kind in the United States—was renamed in honor of Alan Alda, the renowned actor, director, and writer who has made communicating science to the public an art form.

The naming of the “Alan Alda Center for Communicating Science” was announced by University President Samuel L. Stanley Jr., MD, at the Stony Brook Foundation’s annual fundraising Gala, “The Stars of Stony Brook.” Mr. Alda was the guest of honor at the event at Chelsea Piers in Manhattan. Mr. Alda is a founding board member of the Center that now bears his name and a Visiting Professor in the Stony Brook University School of Journalism, which houses the Center. Its goal is to enhance public understanding of science by helping scientists and health professionals learn to communicate more effectively with the public, including public officials, students, the media, and colleagues in other disciplines.

“Without Alan Alda, there would be no Center for Communicating Science,” said President Stanley. “He has been a tireless and full partner in the Center since its inception. During the past four years, he has traveled thousands of miles championing its activities at other universities and labs, at national conferences, and in one-on-one sessions with academic, government and foundation leaders. He has helped train our faculty and develop our curriculum, and he personally teaches some workshops.”

Howard Schneider, Dean of Stony Brook’s School of Journalism, echoed those sentiments. “Alan did not casually lend his celebrity to this effort,” Dean Schneider said. “Alan inspired its birth. He opened doors that would have been impossible to open otherwise. He’s the Center’s evangelist and its muse. When the rest of us run out of gas, he’s been an inexhaustible source of encouragement and creative ideas.”