$2.2 million raised for Scholarships at the 16th Annual Stars of Stony Brook Gala 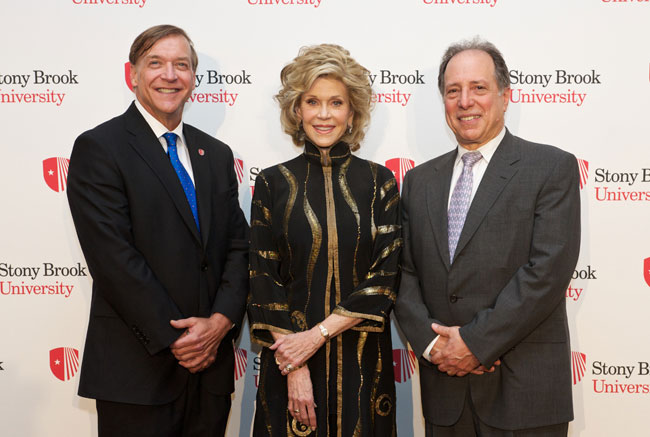 More than $2.2 million was raised to support scholarships at the 16th annual Stars of Stony Brook Gala on Wednesday, April 22. The gala, held at Chelsea Piers in Manhattan, honored legendary actress and activist Jane Fonda for her support as a member of the Board of Directors of Stony Brook University’s Center for the Study of Men and Masculinities (CSMM). The event also marked the 50th anniversary of the Stony Brook Foundation.

Fonda, a two-time Academy Award winner, has long been known for her advocacy on environmental issues, peace and the empowerment of women and girls. She has served on the CSMM Board of Directors since the program’s inception in 2013, and her participation with the organization, which is committed to fostering a world in which everyone reaches their full potential, has helped elevate it in the global discussion of gender equality.

“We’re not going to make it unless women and men work together for gender equality,” Fonda told the room of more than 600 people. “A lot of people don’t realize that the thing that’s holding women back and keeping them from being all that they can be is also damaging men.”

“Our students are a great source of pride at Stony Brook,” he said. “They represent the leaders of tomorrow and are helping to advance our core mission of research, education, and discovery.”

Richard L. Gelfond, the CEO of IMAX and chairman of the Stony Brook Foundation, who graduated from the University in 1976, praised his alma mater. “Without Stony Brook University, I wouldn’t be where I am today,” he said.

Six high-achieving students representing the many who have benefited from Stony Brook Foundation scholarships were highlighted during the evening:

In its 16-year history, the Stars of Stony Brook Gala has raised more than $39 million to support student scholarships and various hands-on research programs. The gala has been able to bring together stars from Hollywood, the arts and academia, including previous honorees Alan Alda, Julie Andrews, Ed Harris and Dr. Patricia C. Wright.