When Michael Bernstein sat down for his first interview in July 2019 after being named interim president of Stony Brook University, he trumpeted what he believed were some of the University’s greatest strengths — its diversity, world-class faculty, inquisitive students and its volume of research triumphs and partnerships. These strengths, he stressed, were heavily influenced by one key element, the University’s geographic location, a concept he calls “place-based identity.”

He was talking about Stony Brook’s ideal location in the heart of Long Island’s growing technology corridor, near the water on the North Shore, and close to the diversity and vibrancy of New York City — all of which have been essential to the University becoming the area’s leading research academic institution and an economic engine for the New York region.

“Given our expertise in energy research, the health sciences and engineering, we have taken opportunities to form close alliances with nationally renowned laboratories in our area,” President Bernstein said. “Our coastal location allows us to operate a marine and atmospheric sciences school that works on local and global problems of the day — a school that is unique in the SUNY system. In addition, our proximity to the five boroughs, an epicenter of culture and ingenuity with its many museums, archival collections and exhibitions, enables us to be at the forefront of rapid innovation in the fine arts. Those are just some of the ways in which our location enables us to do extraordinary work in an array of fields, and our opportunities within these areas are boundless.”

All of this is a recipe for success that began with a generous gift that continues to make an impact on Long Island.

In 1956, Ward Melville donated a 480-acre tract of land near the village of Stony Brook to the State University of New York for a new campus, housing a college to educate science and math teachers. Little could he have imagined how perfect the location would be to sprout a burgeoning research university, situated only 21 miles west of Brookhaven National Laboratory (BNL) and 25 miles east of Cold Spring Harbor Laboratory (CSHL), two of the most prestigious research institutions in the country. The long-standing partnerships SBU has had with these labs have produced extraordinary discoveries and empowered the University to recruit talented faculty and students, changing many lives in the process.

One of these people is F. Marc Michel, who as an undergraduate at Colgate University in the late 1990s studying geology, was convinced he wanted to start an environmental consulting firm. But when he was accepted into the PhD program at SBU, he entered a new world, one that placed him under the mentorship of SUNY Distinguished Professor John B. Parise and Professor Martin Schoonen in the Department of Geosciences, both joint appointees of BNL and SBU.

“[Parise] introduced me to the national lab system,” Michel said. “Brookhaven National Lab was the first one we went to. That visit was life-changing. I dropped the idea of opening a company. I became passionate about basic scientific research.”

Michel said he became so enamored of SBU and BNL that he bought a house nearby. As Stony Brook is part of the management team of BNL, a U.S. Department of Energy national laboratory, its students and faculty have unique access to the lab’s phenomenal facilities. BNL is home to the world-famous National Synchrotron Light Source (NSLS), which was recently replaced by the more powerful NSLS-II. These facilities allow users to study materials with nanoscale resolution. Michel spent his time working with NSLS, studying how small minerals are formed. He went on to earn his doctorate in geosciences at SBU in 2007, and is now an associate professor of geosciences and nanoscience at Virginia Tech.

Parise said he recalls his student very well and what drew him to Stony Brook.

“Being so close to Brookhaven Lab is the best way to attract the best and brightest students,” said Parise, who is also director of GENESIS (A Next Generation Synthesis Center, DOE-EFRC). “We have made the close proximity to the Lab one of our recruitment tools.”

Parise is one of more than 100 SBU faculty members currently spending time researching at BNL. Their work involves physics, the study of nanomaterials, the states of matter in the universe and ways of creating sustainable energy. For GENESIS, Parise is harnessing the power of modern radiation sources, such as NSLS-II, to map the pathways taken by solid-state reactions.

“Our ability to solve energy problems — such as the production, conversion and storage of energy — depends wholly on our ability to synthesize a new generation of materials that surpass those currently in use,” Parise said. 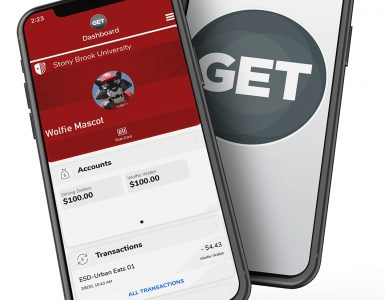 MAY 2020 Yelena V. Barbos ’08 got married in September 2014 and her son, Samuel Adrian Barbosa, was born August 2015. Deena Betze, Esq. ’87 was appointed to the Board of Directors of Court Appointed Special...

When Michael Bernstein sat down for his first interview in July 2019 after being named interim president of Stony Brook University, he trumpeted what he believed were some of the University’s greatest strengths — its...

When Michael Bernstein sat down for his first interview in July 2019 after being named interim president of Stony Brook University, he trumpeted what he believed were some of the University’s greatest strengths — its...