Expert voices are needed more than ever in conversations of national and global importance. Scientists can help people understand the many ways that science shapes our lives and our understanding of the world — and, critically, their evidence-based findings and perspective can help in creating sound, scientifically informed public policy.

Scientific American and the Alan Alda Center for Communicating Science at Stony Brook University are teaming on an online workshop aimed at helping scientists and engineers write blogs and op-eds for magazines, newspapers and other news outlets. Presented in partnership with The Kavli Foundation, two dozen scientists will receive mentoring on writing over this fall and next spring, with successful assignments to be considered for publication as a Scientific American guest blog. The program will culminate with a special gathering in New York City in Fall 2018, where course participants will network with instructors, science communication experts and peers as well as staff from the Alda Center and Scientific American.

Free to scientists and engineers, participants will be selected competitively, with the application process opening today. For more information and to apply, visit www.aldacenter.org.

“Science is a global enterprise, with an ambition — and ability — to address some of humanity’s most challenging problems,” said Scientific American Editor in Chief Mariette DiChristina. “Scientific American, with more than 170 years of authoritative coverage about the progress of science often authored by the researchers themselves, is delighted to partner with the Alda Center and Kavli on this initiative to support scientists and science communication.”

“When we help scientists to be more open, they begin to talk about their work in a deeply personal way. And people want to hear the personal stories behind the research. What happened in those difficult moments in the small hours of the morning? That’s the part we can connect to,” said Alan Alda, founder of the Alan Alda Center for Communicating Science. “Our Alda Center team is excited to partner with Scientific American to develop a blogging course that will produce a new cohort of excellent science storytellers. I can’t wait to see what they come up with.”

“Promoting public understanding of science is central to the mission of The Kavli Foundation,” said Robert Conn, President and CEO. “Scientific American has been a leader in helping the public understand and appreciate science for well over a century. Alan Alda is a star who is trusted by the public, and he has a deep passion about communications and science. This passion is reflected in the Alan Alda Center for Communicating Science. We are simply delighted to join these two great organizations as they work to help scientists become the best communicators to the public of their own scientific work.”

This online workshop and mentoring program will be a companion to a new and open web series to debut this fall that is co-produced by the three partners. During this 10-week public series, valuable insights into science writing and communication will be presented by the editors and writers at Scientific American, the Alda Center and a selection of special guest speakers. Program details for this series will be announced in September. 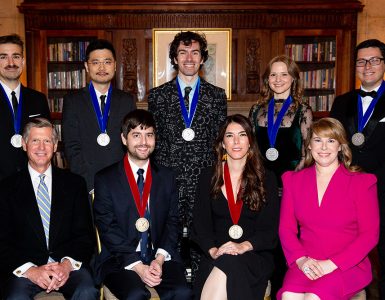