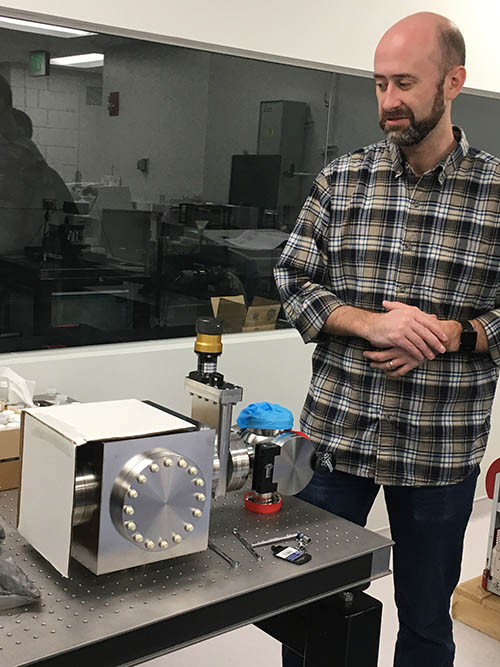 NASA recently joined forces with Stony Brook University students and researchers to venture onto other-worldly terrain in the New Mexico desert as part of a program designed to prepare future astronauts for their potential journeys into space — to the moon and even Mars.

A small group of Stony Brook journalism students, research faculty and NASA experts collaborated on this mission through a program called RIS4E (Remote, In Situ and Synchrotron Studies for Science and Exploration). RIS4E is a five-year, $5.5-million project led by Stony Brook faculty and packed with out-of-this-world lab and field research, including the exploration of environments on Earth that are similar to the terrain where astronauts may venture.

“Usually journalists report on the results of scientific research without knowing about the process,” said Nicola Shannon, one of the students who traveled to New Mexico. “This trip with the RIS4E scientists helped me understand how these results come about, and the incredible amount of work and preparation that goes into them. I think this understanding is necessary to appreciate the world we live in, and the worlds beyond.”

RIS4E most recently sent more than 30 researchers to the Potrillo volcanic field in southern New Mexico — and through another unique partnership, four Stony Brook School of Journalism students shadowed those researchers to report on their fascinating field work.

Visit the ReportingRIS4E website to explore the fruits of their labor — feature stories from the field, drone photography of the research site, profiles of the people involved, plus a photo essay about every hat worn on the trip.

RIS4E serves as one of 13 U.S. research teams involved with NASA’s Solar System Exploration Research Institute Virtual Institute (SSERVI). On the trip, RIS4E researchers explored how handheld geology instruments might best be used by astronauts. They also sought ways to identify underground lava tubes that might provide shelter for astronauts or even harbor signs of life on distant worlds.

Astronaut Barry E. “Butch” Wilmore, veteran of two missions to the International Space Station, conducted simulated moonwalks in the desert as part of the research team. Retired astronaut Harrison “Jack” Schmitt, who walked on the moon during the final Apollo mission in 1972 and served as U.S. senator from New Mexico, also visited the RIS4E team on site.

“We knew that we could make an impact with our unique student journalism program,” said Timothy Glotch, associate professor of Geosciences at Stony Brook and principal investigator of the RIS4E project. “The quality of the reporting on the ReportingRIS4E website speaks for itself and has provided a lot of added value to the RIS4E team’s efforts.”

Prior to the New Mexico trip, School of Journalism students took a special science journalism course to report on research being done at Stony Brook, as well at NASA’s Goddard Space Flight Center in Maryland, the Naval Research Laboratory in Washington, D.C., Brookhaven National Laboratory on Long Island and the American Museum of Natural History in New York City.

For the research team, the journalism students “created an extra air of enthusiasm,” said Nicole Whelley, a NASA education outreach specialist on the team. “The ReportingRIS4E website takes what these NASA scientists do in the field and makes it exciting and understandable for everyone.”

The ReportingRIS4E website for New Mexico is the second site of its kind for Stony Brook’s School of Journalism. A student team also accompanied RIS4E scientists on a mission to the Kīlauea volcanic fields of Hawaii in 2015. Both ReportingRIS4E projects are aligned with the School of Journalism’s efforts to provide students chances to travel and report on other cultures. In the past, the school’s Journalism Without Walls program has sent Stony Brook students on reporting trips to China, India, Cuba, Kenya, South Korea, Russia and the rain forest of Ecuador.

When COVID hit, theaters around the country scrambled to find a way to continue operating. Like many other industries, some theaters began creating online performances that could be viewed from the safety of the home...