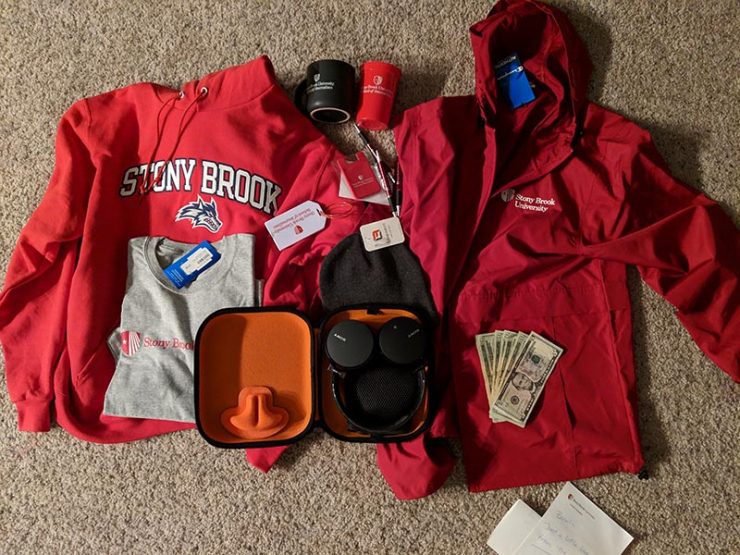 Basil John ’16, a graduate of Stony Brook’s School of Journalism, knows that being a reporter means being prepared to go anywhere and experience anything while on assignment.

Recently, John sat on the floor of a coworker’s spare bedroom and Skyped with students in Assistant Professor of Journalism Richard Ricioppo’s Advanced Broadcast Journalism class. What the class didn’t know when the conversation began was that John had recently become a part of the story he was sharing with them.

This past September, as Hurricane Florence bore down on the shores of the Carolinas, John was working as a broadcast journalist for WWAY, an ABC/CBS-affiliate TV station based out of Wilmington, N.C. And for nearly a week, he and his colleagues immersed themselves in round-the-clock coverage of the Category 4 storm, bunking with the Cajun Navy and working out of a nearby emergency operations center.

“Before the storm, I was a little nervous because this was my first time doing constant, live coverage with no commercials. My producer said to be ready for anything,” said John, 24, a native of New Rochelle in Westchester County.

Prior to the storm, John took minimal preparations: He packed up his computer, moved valuables to one end of his third-floor apartment, and took his pet parrot, Laddu, to stay with a friend. When he returned days later, he was horrified to discover the storm had destroyed his home and almost all of his possessions.

“The gutter was on the ground, and the ceiling was torn on both sides and hanging down,” he recalled. “The area where I’d pushed my belongings was full of water. My clothes were moldy.”

A coworker came to John’s apartment, helping him to salvage whatever he could and pack what little remained into his Subaru Impreza. Overwhelmed, he sat on the bed and cried.

“I knew in that moment that I wasn’t going to come back to that apartment,” John said. “I kept thinking, ‘Where am I going to go?’”

He ended up staying with friends for a few days. By that time, word got back to John’s former professors at Stony Brook that he reported on the storm.

“Basil is a great kid and great at what he does,” said Ricioppo, who asked Basil to speak with his class a few weeks ago to share his real-world experience of living through and covering a natural disaster. “The students really enjoyed talking to him and hearing about his experiences. In the midst of that, he mentioned he had lost his apartment and all of his nonwork clothes, including his Stony Brook apparel. I figured that I could either buy him a shirt myself, or pass a hat and get him a lot more. It was easy to go the extra mile for him.”

Soon after, John received a package from Long Island containing a host of Stony Brook gear, as well as a rain jacket, professional editing headphones and a monetary donation. He cried again.

“I look at my time at Stony Brook as some of the best years of my life, and my shirts were a reminder of those experiences that meant so much to me. It was so hard to lose them. When I opened the package, I couldn’t believe how much everyone at Stony Brook cared.”

Recently, John accepted a position as a multimedia journalist at WRIC in Richmond, Va., one of the top news markets in the country.

“During the interview process with Richmond, I told them that when I interviewed people who said, ‘I don’t have a home to go back to,’ I knew exactly how they were feeling. I can empathize. A textbook or a news show can’t teach you that,” he said. “Even though it was a difficult experience, I wouldn’t change a thing. All of this helped me mature and grow.”