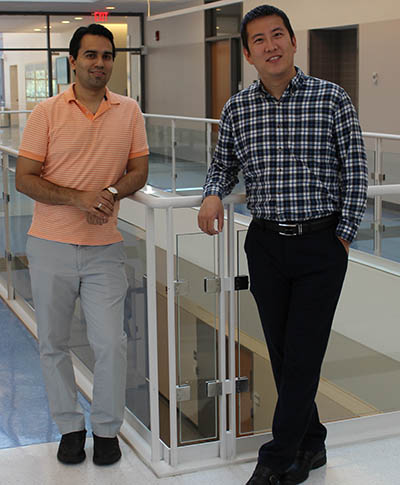 Researchers in the Departments of Computer Science, and Applied Mathematics and Statistics awarded $449k through the National Science Foundation’s NeTS program.

Even for the personal smartphone or home computer user there is no avoiding the use of cloud computing. Cloud computing is low in cost, easily available, and offers access to useful services that would otherwise be out of reach. Services such as Netflix, Amazon Fire, and Expedia are only some of the popular online services being hosted on the cloud. On the backend, dynamic applications in the cloud are more lucrative if their deployments grow through dynamic capacity provisioning. Software deployments must be carefully provisioned to meet their performance requirements without wasting resources.

Most resource provisioning solutions today employ predictions to estimate demand and provide resources, accordingly. At times, this process could be fraught with errors. With the support of a National Science Foundation (NSF) Networking Technology and Systems (NeTS) award of $449k researchers Anshul Gandhi and Zhenhua Liu, seek to bridge the gap between predictors and provisioning solutions.

The goal of their NeTS project, Demystifying the Role of Prediction Models: Bridging Prediction Algorithms and Resource Provisioning, is to develop and leverage error models to fully realize the potential of predictors. According to Gandhi, “Our research will allow businesses to maximize resource utilization despite prediction errors.”

“This is the kind of cross-cutting research we encourage among our faculty, to advance technologies that push the boundaries and challenge traditional thinking,” said Fotis Sotiropoulos, Dean of the College of Engineering and Applied Sciences. “I applaud Professors Gandhi and Liu on their collaborative approach to this research, and congratulate them on this recognition from the NSF. I look forward to following the progress of their research.”

Gandhi and Liu will realize additional benefits of their research through technology transfer opportunities with industrial partners.

NSF identified this NeTS project as “transformative research” related to fundamental scientific and technological advances in networking as well as systems research. NSF funds projects such as these in the hope that it will lead to “the development of future-generation, high-performance networks and future internet architectures”.

Arie E. Kaufman, chair of the Department of Computer Science, said, “In addition to finding the answer to network performance challenges, this project is especially interesting because it will directly contribute to interdisciplinary courses taught in two major departments on campus.”

About the Researchers
Anshul Gandhi is an assistant professor in the Department of Computer Science and he is affiliated with the Department of Applied Mathematics and Statistics, and Stony Brook University’s Smart Energy Technologies Cluster. He earned his PhD in computer science from Carnegie Mellon University, where he was advised by Prof. Mor Harchol-Balter. Prior to joining Stony Brook, he spent a year as a post-doctoral researcher in the Cloud Optimization and Analytics group at the IBM T.J. Watson Research Center.

Assistant Professor Zhenhua Liu is currently based in the Department of Applied Mathematics and Statistics, and he is affiliated with Department of Computer Science, and Smart Energy Technology Cluster. He was recently on leave for the ITRI-Rosenfeld Fellowship in the Energy and Environmental Technology Division at Lawrence Berkeley National Laboratory during the year 2014-2015. Dr. Liu earned his PhD in computer science at the California Institute of Technology.

Gandhi and Liu also recently received another NSF award, titled Enhancing the Parasol Experimental Testbed for Sustainable Computing, as part of an infrastructure grant led by Rutgers University to study sustainable computing in datacenters, which is aligned with the Smart Energy Technology cluster’s objectives.