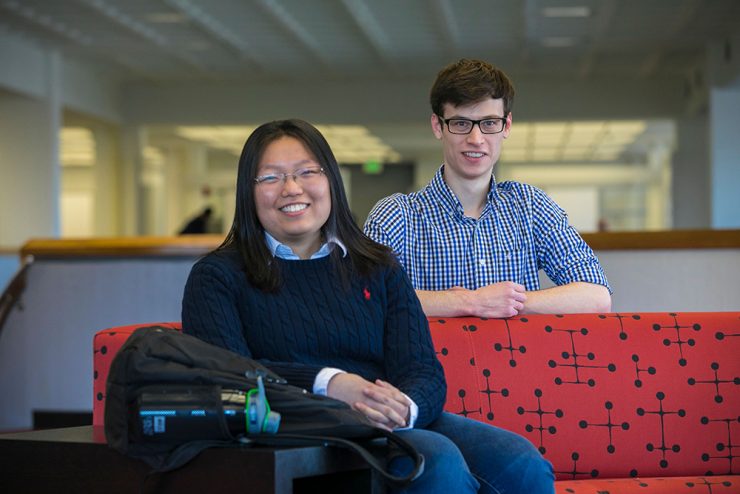 Two alumni from the College of Arts and Sciences at Stony Brook University, Ann Lin ’18, Biochemistry and Economics, and Chris Giuliano ’18, Chemistry, and Applied Mathematics and Statistics in the College of Engineering and Applied Sciences, were recently spotlighted in an article by Forbes magazine for research conducted to explore the effectiveness of cancer drugs.

Lin and Giuliano were part of a research team brought together in 2019 by Cold Spring Harbor Laboratory Fellow Jason Sheltzer. The two former Stony Brook students co-authored a paper titled “Off-target toxicity is a common mechanism of action of cancer drugs undergoing clinical trials,” which was published in the influential interdisciplinary medical journal Science Translational Medicine.

In the paper, the team uncovered how some drugs may have cleared many stages of the drug discovery and development process for reasons other than hitting their primary targets. In other words, these drugs worked or demonstrated efficacy due to off-target effects and not because the intended primary target was hit.

Sheltzer told Forbes that the impetus in publishing the paper was not to draw attention and point fingers at any pharmaceutical companies, but rather to identify what he saw as a general trend or pattern of insufficient validation.

“To give one example, we studied inhibitors of the MELK (maternal embryonic leucine zipper kinase, a protein that plays a role in biological processes) and confirmed that the drugs were having a direct effect on MELK,” said Sheltzer. “At the same time, the inhibition of MELK kinase was not the drug’s mechanism of action. That is, it could inhibit MELK, but cancer cells did not care whether MELK was inhibited or not. This suggested that its actual mechanism of action was something else in the cell.”

The paper turned out to be one of the most popular papers in the history of the Science Translational Medicine journal according to data science company, Altmetric. Sheltzer said he has been contacted by both scientists and physicians since the paper was published.

Lin told Forbes that the most rewarding thing to come from the research was equipping the patients going into clinical trials with the power to make more informed decisions.

“Several cancer patient families reached out to me after a New York Times article was published and asked about the research,” she said.

During their Stony Brook careers, both Lin and Giuliano were recipients of the prestigious Goldwater Scholarship to perform the MELK project research. Both were also on the 2015 iGEM (International Genetically Engineered Machines) team in the summer after their freshman year.

Giuliano received an NSF Graduate Research Fellowship and a 2018 SUNY Chancellor’s Award for Student Excellence and is currently a graduate student at MIT.

Lin was included in Her Campus magazine’s 22 Under 22 Most Inspiring College Women in 2017 and spent a year on a Fulbright Fellowship before entering graduate school at Stanford. She was also named to the Forbes 30 Under 30 list for 2020 in the Science category.